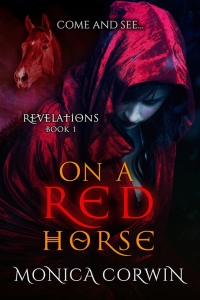 Scarlet needs a new job, but Horseman of the Apocalypse doesn’t sound good on a resume. Three years ago she followed her companions to Earth in an effort to live human lives. But the moment she left her husband Tyr she knew life wouldn’t be worth living. Lonely and longing for her husband, Scarlet is on a path of destruction that could endanger all the riders.

Tyr, god of justice, hunts his wife across the realms. From Hell to the Golden Throne, he travels until he finds her working as a phone operator. Scarlet is no longer the woman he fell in love with, and he is determined to bring that woman back to him if it takes the rest of eternity.

Even though the Horsemen live on Earth, they are still responsible for guarding four seals that can unleash the Apocalypse. When a prophecy is awoken by a deity who only has her own interests at heart, they must go on the defensive to keep their homes on Earth and protect the seals. If even one seal opens, it will start a chain reaction that will force the Horsemen to take up their mantles and destroy the new lives they’ve worked so hard to build. 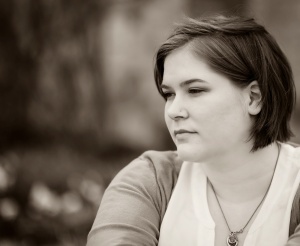 Monica Corwin is an outspoken writer who attempts to make romance accessible to everyone no matter their preferences. As a new Northern Ohioian Monica enjoys snowdrifts, three seasons of weather, and disliking Michigan. When not writing Monica spends time with her daughter and her ever-growing collection of tomes about King Arthur.

As she started to dial her first help call of the day, a deep voice bellowed through the room. “Scarlet!”

She froze. Surely the voice hadn’t meant her. No human alive dared raise their voice to her. After a moment of confusion, she popped her head up and looked around. A tall man towered over the workspace, definitely out of place. She ducked down so fast her knee slammed into the desk. Scarlett muttered a soft curse. Her heart shot into her throat, and she tried to swallow the fear rocketing through her. Her mind skittered to formulate a strategy. If she stayed there, he’d hunt her down to the very last cubicle. She could crawl out the side door, but more than likely he would see and find her anyway. She recognized his voice, and it promised vengeance.

“Woman, I know you’re here. I can smell you. Come out,” the man bellowed. She heard the menacing growl in his voice as he shuffled closer to where she hid.

Her face flamed hot. He would have no idea how much he embarrassed her at that moment. She looked down at her outfit: a sensible black pencil skirt, short black pumps, thick black stockings, and a purple cardigan. He might not even recognize her dressed like this, or wearing clothes for that matter. She wanted to ignore him, but he would look through every cubicle until he found her and wouldn’t be quiet about it. After a moment she swallowed her nerves and stood up to face him. He had moved further down an aisle but caught sight of her as soon as she showed herself.

“I finally found you, woman,” he shouted with a lopsided smile and stalked toward her. The closer he got the higher she had to trail her gaze up or risk being reminded of better times. He was barely dressed, save a few pieces of leather and some fur. The man descended on the NYC streets in the dead of winter like that? Certainly not the craziest she’d seen people dress around town though. Once he made it to her, she pulled him into her cubicle by his good left arm and shoved him into the open seat across from her, away from her nosy coworkers’ eyes.

He smiled at the close quarters and reached out to her, but she pushed him away so the chair sat against the opposite wall of her workspace.

“What are you doing here?”

“Looking for you,” he said as if the answer was obvious. His forehead scrunched in the cutest way, but the softness that action inspired withered as his eyes roamed down her body.

His leer was the least of her concerns as she looked at his leather pants and animal fur stole. “And what are you wearing?”

“What I always wear. And is that how you greet your husband after so long an absence?”

“What were you expecting?” she asked, squinting at his furs. “Does that animal even exist on Earth?”

“A kiss perhaps, and of course it’s a—”he broke off to lift the face of the beast to his”—it’s a fox.” He didn’t sound very confident in that assessment. 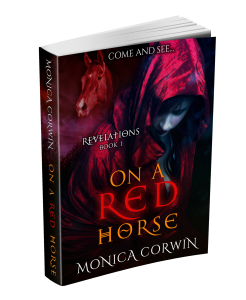 One thought on “On a Red Horse ~ Monica Corwin”