War has come to Thunder Bay. With magi encroaching upon the vampire stronghold, Luca cel Rau must fulfill his duty to protect the younger vampires who are reliant upon his ancient strength. But when he finds a bruised but defiant human woman outside their lair, it is more than duty driving him to protect her — and she might very well be a liability and distraction he can’t afford.

Templeton Reed has been hiding his inner polecat since he was a child. Keeping his animal secreted is hard for a shifter, especially when one is living in a secret community of mystical beings. It`s the wolf shifters that cause Templeton the most trouble with their darned sensitive noses.

Templeton has a run-in with the Lake Erie pack and their alpha, Mikel Lupei, at the Office for Transmogrification Registration (OTTER). Templeton has a desk job checking registration papers and dealing with wolf shifters is not part of his job description. After that upsetting meeting the meek and mild office worker suddenly finds himself in the center of not only civil unrest among the shifter community, but a violent plan for a coup aimed at rousting Mikel.

Templeton and Mikel, a skilled tracker of rogue shifters, are soon not only fighting for their lives, they`re also fighting the rigidly archaic rules of their kind, as well as the person responsible for trying to take over Mikel`s pack from the inside. Can this magical odd couple turn a passionate attraction into a full-fledged love affair?

by Merline Lovelace
The wedding was all in fun…but the marriage was all too real! Unfortunately, neither the bride nor the groom discovered until after the supposed “mock” ceremony at a Halloween Charity Ball that they’re actually married and have just won an all-expense-paid honeymoon cruise to the Caribbean. Intending a quickie divorce in Mexico, they don’t plan on white beaches, balmy breezes, modern-day pirates, and a growing hunger for each other.
https://www.amazon.com/Halloween-Honeymoon-Silhouette-Desire-1030/dp/0373760302/

A cold stone heart breaks more easily than it beats. Than it loves.

Damien was a loyal warrior, killed in battle in 1203. Because of his true heart, he was given the option to pass on to his eternal reward or exist in another state of being as a protector… until the time came when he could resume living the life he’d been cheated of.

A soldier by nature, he chose the latter. And he waited centuries—as a gargoyle—growing increasingly bitter about his choice. Then he sees her.

Rina is a hard worker and loyal friend. She just has the worst luck. One night, after saving her best friend from a violent assault, she finds herself at the attacker’s mercy. Then, out of nowhere, a savior comes and rescues her.

With only an angel to guide him, Damien must make the right choices to win Rina’s heart, or be forever damned as a grotesque mockery of the guardian he once was.

Not real ghosts, don’t be silly people! Halloween is right around the corner and folks are gearing up for the annual Halloween ball at Havencroft Manor. I know I have my costume all picked out, how about you? Lets hope Mrs. X can come up with something new this year, she almost split the seams of her Naughty Nurse costume last year. Yikes!

Dunescape Cottage brought Bram Vanmatre home to haunting childhood memories of a night when the lights went out, priceless jewels disappeared, and his father washed up dead on a deserted beach. Echo St. Clair wanted to deny the estate’s supernatural attraction. Then, on the stormy night of the Dunescape Halloween masked ball, Bram and Echo came face-to-face with the past.

Escaping her controlling and manipulative uncle, Sammie Tamlson seeks refuge in a run-down house in Haven. To her surprise, the house, called Silver Hart, is rumored to be haunted after a series of murders were committed on the property. The owner of the house takes pity on her, and Sammie is hired on as Silver Hart’s caretaker.

Chris Hanley knows a lucrative business venture when he sees it, and the paranormal is all the rage, right now. Starting up Haunted Happenings, a company that hosts ghost hunting events is the perfect opportunity for Chris to make money while indulging in something that interests him. Chris visits Haven hoping to investigate Silver Hart, but getting inside the infamous location proves harder than he imagined. The feisty caretaker won’t let him anywhere near the house. Chris discovers that there’s more lurking in the shadows than angry spirits from the past. Someone wants Sammie dead. And now it’s up to Chris to save her from the all the dangers of Silver Hart.

Some ghosts won’t take “yes” for an answer.

Jack Harris has loved Legs Anderson since they were kids. Now that he has her in his bed, he has no intention of letting her go. Aunt Ada has other ideas, even from the grave.

Orphaned at a young age, Legs Anderson owes her Aunt Ada everything. The stoic old lady raised her, and Ada’s warnings about men—and the Harris boys in particular—have stuck, even after her death. Of course, that could be because Ada stuck around, too.

Patience is not one of Jack Harris’s virtues, and he’s waited too long to start a life with the woman he’s loved since childhood instead of them just knocking boots. Now Ada is interfering from beyond the grave, haunting the old Victorian house she bequeathed to her niece and reinforcing Legs’s fears of commitment. But Jack won’t give up. No matter what trouble may follow, the house will be renovated, Ada will learn to let go, Legs will put her money where her mouth is…and then Jack’ll put his lips everywhere else.

What do you get when you mix cowboys with ghosts? A collection of eight (stand-alone) amazing stories from the Old West with haunts of every variety all connected by a paranormal detective agency. The spirits are restless and Nat Tremayne is sending his best agents westward to face some of the agency’s most challenging cases.Get your love of alpha cowboys on and feed your addiction for the bizarre (and sometimes spooky) world when you download The Good, The Bad and The Ghostly. Bestselling and Award-winning authors are pleased to save you more than 75% on this fantastic boxed set! (Price if books sold separately).
Amazon link:
https://www.amazon.com/Good-Ghostly-Western-Romance-Historical-ebook/dp/B01KKVK9BI/ref=sr_1_1?s=digital-text&ie=UTF8&qid=1477591284&sr=1-1&keywords=keta+diablo

Born from Death book one

Ilona discovers what it means to have a mother who is a modern woman and a father who is a 19th-century gentleman ghost.

After being hit by a car and taken to the hospital, Ilona starts to realize she’s different from other people, and that her mother has hidden the truth from her. She sneaks out of the hospital in order to discover the truth.

A mysterious boy named Archer guides her through Brooklyn and introduces her to Hendrick, the man who claims to be her father—though he died in 1890.

Ilona must discover not only what she must do to rid the city of Soll, a sadistic and powerful spirit, but also what it means to be half ghost. She proves what her mother told her—love is stronger than death.

Will they discover the truth of their ancient connection before it destroys them both?

Ilona continues to struggle with loss, as well as trying to find where she fits in with other people, if she ever really will. She starts taking dangerous risks.

Archer is desperate to protect Illona and discovers more about himself in the progress. When Ilona is in danger of being mauled by a dog, he desperately tries something that shouldn’t be possible. And yet he succeeds.

This is just the beginning of his discovery of who—what—he truly is. 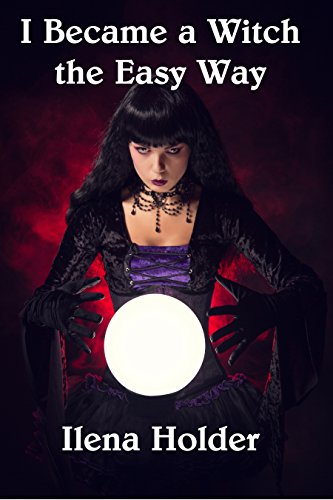 I Became a Witch the Easy Way

Sally is considering joining an earth-based religion. When the email to join a local coven arrives, she has to make a decision.

Brett Hargrove was a loner and stayed beneath the radar just like most of his clan as they moved from town to town every few years. He tried his best to live a simple life, as much as a vampire could anyway.

Jamie Paulson was barely out of high school when she’d met the dark and dangerous, Gary. Since then he’d spent the years tormenting her and breaking every part of her soul.

When Brett learns of the abuse that a member of their clan has inflicted on one of their own, he steps up to be the vulnerable woman’s protector. Though Gary has no intention of letting Jamie go. And Brett soon realizes that a battle for the woman and their very lives may be the only way they can truly be free.