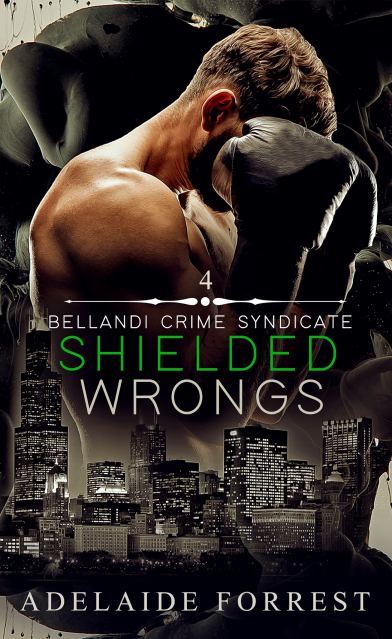 Title: Shielded Wrongs
Series: Bellandi Crime Syndicate #4
Author: Adelaide Forrest
Genre: Dark Mafia Romance
Release Date: October 26, 2020
BLURB
Sadie
Of all the Bellandi men, Lorenzo Vescovi should have been my safety. The one who would understand right from wrong.
But there’s a demon inside him, a cold-blooded killing machine begging to be freed from what remains of his humanity.
I tempt him. I tease him, just by being me.
And when war erupts all around us, I have to hope I’m strong enough to withstand the flames of his possession.
Enzo
Of all the women in the world, Sadie is the one I should stay the farthest away from. The one my boss forbids me from touching.
But one look at her honey eyes, and I’m lost to the need to make her mine.
She’s a mess of contradictions and full of jagged edges that threaten to pull me apart at the seams and unleash the beast lurking within.
I can’t resist her rebellions. But when she’s threatened by my enemies, I’ll risk everything to keep her safe.
Even my humanity.
Shielded Wrongs is a full-length standalone novel with an HEA, but the series presents a better reading experience when following the suggested reading order.
This series contains dark elements, including an over-the-top antihero who does as he pleases. Please read at your own discretion.
ADD TO GOODREADS

EXCERPT
With outstretched arms, he grabbed the top rope around the ring and tugged it down as he stared at me. A predatory grin played at the sharp curve of his lips, an overwhelming tease in and of itself.
Those lips were made for sinning.
Resisting the urge to move, I refused to let him see me squirm. He hadn’t so much as touched me, but he seared my skin with his brand and imprinted himself on my soul with nothing but a look. “You want me to put my hands on you, Baby Girl?” he asked. “I can think of far more interesting ways to entertain you.”
I swallowed, shaking off the fog of lust threatening to make me jump his bones.
Well, bone.
“This is the only thing I’m interested in,” I said.
“Little Liar,” he chuckled, shaking his head. The look on his face held zero trace of the annoyance most men would have felt if they thought I was playing hard to get. Instead, my resistance only seemed to spur Enzo on and make him more determined to watch me unravel. Something lurked behind his eyes, a demon simmering below the surface even though his face and words seemed otherwise amused.
I had the distinct impression I was treading water in the deep end and too naïve to realize a current threatened to pull me under.
“Don’t be a douchebag,” I laughed. “We both know sex would be a blast, but it isn’t going to happen. So put on your big boy pants, jump up here, and show me what you’ve got, Enzo.”
He complied, pulling himself into the ring with a masculine grace that should have been impossible for a man his size. Enzo moved like an assassin in the night, fluid and silent until he wanted his victim to feel that single moment of pure terror before it all ended. Bellandi men were psychotic, often enjoying the thrill and fear they instilled in their victims before they struck.
But Enzo was his own brand of crazy. Determined to win, with zero interest in anything but getting the job done, he didn’t do it for joy.
He did it because it was his duty, and I had a feeling he was a killing machine beneath the careful facade he created to hide what lurked inside him. 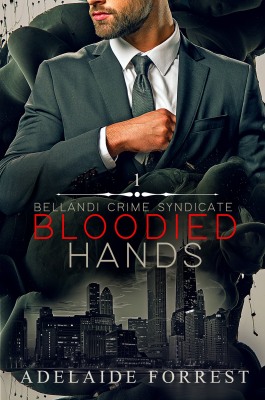 Adelaide fell in love with books at a young age and quickly discovered her love for writing soon after. Since then, she’s become a self-professed plot hoarder of over 300 book concepts.
After receiving her degree in Psychology, Adelaide went on to work in a therapeutic riding facility. When her daughter was born, Adelaide traded out her boots to be a stay-at-home mom. In 2019, she added author to those job duties after a lifetime of dreaming about it.
She lives in New York with her husband, two children, and their dog and cat who all make up the center of her world.
AUTHOR LINKS
FACEBOOK
FACEBOOK GROUP
INSTAGRAM
TWITTER
WEBSITE
BOOKBUB
NEWSLETTER
AMAZON