W. E. Lawrence’s latest historical romance novel Chakana is a James Bond meets Indiana Jones action/adventure story. It is set in Peru, just before the start of World War II. The basis of the tale is a race between good and evil to find an ancient treasure that could affect the outcome of the war before it even begins.  It’s filled with danger, suspense, some humor, and even a torrid romance. 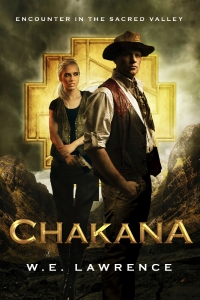 In 1940, before the start of World War II, James Fleming, the original British secret agent, races on a high-stakes chase to track down the ancient lost treasure of King Huascar of the Incas. He must recover it before the Nazis do or the whole world will be in imminent danger.

Fleming joins forces in the remote ruins of Peru, South America with Kate Rhodes, a policewoman on leave from the United States, her archaeologist brother, Nick, and their college professor, Dr. Charlie. Together, they must decode and interpret the clues, and face the challenges of the Chakana on their hunt for the treasure.

The group is hounded throughout their search of the ancient Sacred Valley by international artifact smugglers, familiar with the Chakana and working with the Nazis, who are determined to acquire the treasure to help finance their war effort.  Intrigue, danger, suspense, action, adventure, and even romance abound in this brave band’s quest to save the free world.

“Chakana by W.E. Lawrence is a romantic historical adventure that is impossible to put down. Chakana has all the adventure and excitement that will keep you on the edge of your chair and reading late into the night. W.E. Lawrence knows how to keep the suspense, romance, adventure and mystery alive on every page. If you like Indiana Jones, you will love Chakana. I don’t think anyone will be disappointed when reading this book – it is a five star plus winner.” – Reviewed by Trudi LoPreto for Readers’ Favorite

“Chakana is written for modern audiences looking for a slap-bang adventure brimming with intrigue and romantic tension. In this regard, Lawrence’s novel excels splendidly. Its simplistic style of narration makes it an easy read and highly accessible for a wide variety of audiences… the book offers a drama that most people will heartily devour and which will have those people wondering where the time has gone after they’ve done so.” – Reviewed by Red City Review

The rumble of thunder sent the horse into a nervous prance.  The animal jerked its head and whinnied as James Fleming pulled in the reins to steady his mount.  “Whoa there, big fella. It’s just a few boomers, nothing to be concerned about.”  But when he raised his gaze to study the sudden ominous build of cloud formations, the certainty of a brewing storm made him decide it was time to get back to the barn.  With a gentle tug, he turned the horse.  “All right, Major, you win.  Let’s go home.”

James had enjoyed these lone horseback outings through the hills and valleys of the countryside and took them as often as he could.  However, this would be his last ride.  He would miss America. Ohio in particular.  He had learned a great deal the three years he spent there, working and studying.  He even learned things he hadn’t intended, like riding horses owned by his sponsors who graciously opened their home and provided him with a place to stay.

But the time had come to return home.  The winds of war were building between his homeland of Great Britain and Germany, now ruled by the radical Nazis hell-bent on avenging their defeat in the Great War.  His country needed him, and James, always a patriot, would contribute any way he could.

He again looked to the sky.  The storm had moved in quicker than he expected.  Dark angry clouds now directly overhead made it look as if night was descending.  Gusty howls of wind and more rumbles of thunder gave sound to the suddenly eerie scene.  His horse became more frantic by the moment, pressing the need to get out of the weather as soon as he could.  Although unfamiliar with the shortcut through the valley and having been warned by the ranch hands that the territory contained dangerous marshland, he decided to take the chance.

Entering the valley, his heart beat faster.  After little more than a hundred meters, the trail narrowed but he pressed on.  Clouds linked together and the low whistle of wind made the hair on his neck stand on end.  Thank God, it hadn’t started raining …yet.

Then a sudden crack of thunder crashed over their heads.  The horse bolted.  Using what he’d been taught, James fought the reins and had his mount under control in a matter of seconds.  He exhaled, then stopped to regain his bearings.  The animal had only traveled another dozen meters, but his relief was short lived.

The ground beneath them began to quiver.  When he tried to turn the horse, the earth sucked at the animal’s hooves like quicksand.  Again, his heart raced.  He had to get out, but the horse, now in full panic, reared back and threw him.  Falling backwards, he landed hard in the swampy marsh.  As he lay stunned, he heard the horse struggle to gain its footing, and then gallop away to freedom.

The horse escaped, but James was not so fortunate.  Sinking, he tried to scramble out but the marsh restricted his movement.  The more he struggled, the faster he went down.  When up to his waist, he stopped.  This couldn’t be happening.  This was supposed to be his last day in America.  He couldn’t die like this.  But the wet mud and the tangy smell of rotting vegetation made it all too real.

Nearly panic stricken, James turned his head and caught sight of a fallen branch sticking up out of the marsh like an outstretched hand.  With trembling fingers, he reached out and grasped it.  After he pulled himself closer, he slung an arm over and hung on.  He tried to relax so he could catch his breath but each time he started to sink, he had to wiggle upward to keep his head above the marsh.

Soon, the wet mud and exhaustion began to take its toll.  Though it looked hopeless, he began to shout.  He shouted as long and as hard as he could.

E. Lawrence graduated in 1978 from the University of North Carolina in Chapel Hill with a BS in business administration. He has run a successful home health care supplies distributorship for the past twenty-three years.