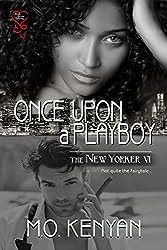 Once Upon A Playboy; The NewYorker BK 4

Karma’s a bitch. Life is too, and DJ found that out the hard way, but his alter-ego provides the perfect place to hide. In his playboy persona, he can escape the betrayal, the wounds, and the guilt of his past—after all, life in the fast lane leaves little time for anything other than women, drink and the high life of self-gratification. For the first time in his life, DJ is living free and loving every minute of his emotionless existence.

Then he meets Eve—sweet, perfect Eve, the most unlikely stalker imaginable. Innocence is a powerful weapon in the right hands, and love is a broadside guaranteed to bring down even the most hardened playboy. It has all the makings of a happy ending, right?

But Karma’s a bitch, with a vindictive knack of twisting to past to destroy the future. With DJ and Eve torn apart, victims of revenge and their own weaknesses, Karma wins again. Or so it seems…

DJ had never run away from anything in his life, until this moment. He couldn’t explain it, but his heart had kicked into gear when he looked into those deep, emerald eyes. She was trouble, and DJ couldn’t afford that kind of trouble at the moment. He was here trying to find himself, not his heart. He took out his phone and called Ava. “Change of plans. Meet me at my cabin instead.”

DJ gave one backward glance and instantly regretted it. Now he knew why they said once you decide to move on never look back. Eve, that was her name, it had to be creational. She was standing at the window, watching him with a look in her eyes that he hoped didn’t mean more than a normal crush. DJ knew how to handle girls with crushes. He gave them a kiss, a night of sex, a piece of jewelry and it was ci vediamo mai, as they said in his mother’s language. And for those who didn’t understand, see you never. However, emerald didn’t look like the type a man had fun in the sack with and waved goodbye to. Not without taking a serious blow to the heart. That was damage he couldn’t take at the moment. Falling in love was definitely not an option.

Then walk away. Stop staring at her. Don’t notice how perfectly the sun illuminates her glowing face. Look away from her thick hair that you would love to bury your fingers in as you kiss her. And, for the love of God, do not look into her enchanting emerald eyes.

“Mio Dio, don’t do this to me now.” DJ wasn’t a religious man, but when he came across a woman like Eve, it was hard not to believe in divine intervention. He put on his sunglasses and half-ran, half-walked away.

A night with Ava, followed by a binge of sex with a few willing names he had in his phone directory, and in a few days he wouldn’t remember Eve. Deciding never to go back to the coffee shop was also an added advantage. If he didn’t see the object of his…desire…no, torture, he wouldn’t think about her. Out of sight, out of mind.

DJ walked down the path that led to his beach cabin. It didn’t help that it was only a hundred yards from the café. He would have to look into moving. DJ stopped in his tracks and laughed at himself. He couldn’t believe that he was willing to go through so much to avoid an attraction… that’s what it was. Love at first sight was saved for little children and their fairy tales. This was real life. Kono knew that, so did Reno and now Rayne. He needed to focus his attention on helping his big brother with their sisters. Thinking about the love he had for two of the most important girls in his life was bound to overturn the…fascination, for want of a better word, he had with Eve.

For the moment, burying himself deep into a vivacious redhead with the talent of making a man buck in bed like a fish out of water would have to do. DJ stepped into his cottage and stripped off his shirt and jeans. He poured himself a glass of whisky and sat by the window, waiting. The moment he looked at his watch there was a knock on the door. Even though Ava regularly dropped by for sex, he never gave her a key. A key symbolized more than he was willing to give. It meant walk into…no, invade…my life when the need arises. Come snoop in my things. Put my drawers in disarray as you arrange yours. And in DJ’s bathroom there was definitely no room for two toothbrushes.

DJ opened the door and Ava greeted him with a smile and a bikini top that showed more than it should. Her bare legs peeked from under the sarong she was wearing. With one sweep of his gaze he took her all in. That was the moment he knew he was fucked, screwed, done for. Instead of pulling Ava into his arms and devouring her sexy body, he got the urge to shut the door in her face. His survival instincts kept him from doing it. Instead, he stepped back and let her walk in.

“Hallo, darling.” The sway of her hips seemed more exaggerated with each step she took. “I had to change my outfit since you changed our rendezvous place. I thought you liked the coffee there. It is morning.”

Ava swirled around and, by the frown on her face, DJ knew they were about to get into it.

“Whisky, this early in the morning? I know it is happy hour somewhere, but that somewhere is not here.” She looked down at her watch. “It’s barely ten o’clock, for Christ’s sake. I will not have an alcoholic for a beau.”

“Then it’s a good thing I am not your beau.” DJ threw back the contents of his glass and sat back in an arm chair. “Take your clothes off.”

I’m just a girl who loves to dream.