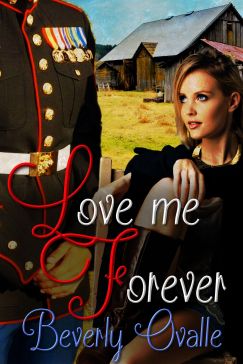 Staff Sergeant Liam McGregor doesn’t know what hit him. Sent home to recuperate from an IED blast, Liam is stuck in a wheelchair and is sentenced to surgery and physical therapy before he can walk again.

A physical therapist, Abby Worth has loved Liam McGregor since she first noticed boys. It’s too bad he’s her brother’s best friend. She has always been firmly put in the baby sister zone no matter how hard she tried to catch his eye.

Liam sees Abby and when she goes home with him doesn’t know how he can keep his hands off of her. She’s now old enough to touch and the fire in his blood and the combination of pain killers make him lose control. Abby can’t help but take what she’s always wanted.

Together they have to overcome their fear of being left behind to grab what they have always wanted-each other.

Liam heard a light footstep as his nostrils caught the scent of flowers. He ignored the sight and scent, keeping his head tilted back as he stared upward at nothing. It was probably another nurse. They came and went, their footsteps echoing down the corridor. Most didn’t smell as good as this one, though. She slowed as she spotted him and stopped in front of him. Liam couldn’t ignore the common courtesy that had been drilled into him since birth. He lowered his head and looked into familiar blue eyes.

The gasp from her lips assured him that it was indeed Abby, little Abby Worth, all grown up. He had been best friends with her brother Hank since middle school when their family had settled down on the small spread they bought just outside of town. He stifled a groan as he ignored the familiar sensations she engendered in him since she first started filling out her bikini. He’d felt like a lecher at twenty-two when he first noticed her as more than his buddy’s little sister. Thank goodness he’d only been home on leave at the time.

“Baby girl? What are you doing here?”

“I was called for a job. I’m just here to get the information before heading out.” She looked at him, and he could see the worry in her eyes. She didn’t even call him on the nickname he knew she hated. “What happened to you, Liam? I never heard you were injured. I can’t believe Hank didn’t tell me.”

“I was in an IED blast. I’ve been in the hospital and now being sent home for recovery.” He shifted and couldn’t help the groan that escaped. He’d been an idiot to insist on sitting in the chair. His butt was numb and his bad leg, not that he really had a good one right now, throbbed with each beat of his heart. The unforgiving hard plastic just seemed to make it worse.

“Is that your wheel chair?” At his nod she gave him an exasperated look. “And I suppose you chose to sit on this poor excuse for a chair?” She shook her head at the rhetorical question. “Of course you did. Here, let me help you back into your wheel chair unless you can manage it yourself.”

He raised an eyebrow at her snort. She was busy checking his chair and locking the wheels. She was obviously familiar with the operation.

“I’m a physical therapist. Believe me, I’m stronger than I look.” Abby helped him up and into his chair, and Liam had a sinking feeling in his gut.

“What job did you say you were here for?” Liam hoped he was wrong. The thought of her hands on him made more than his head throb. He had no idea how he could hide his reaction to her if she was the one being assigned to the ranch.

“Don’t know yet. I had a message on my answering machine that I was needed. I came on down to check it out. Why?”

“No reason. Just curious I guess.” He settled back into his wheel chair with a sigh. Abby arranged his legs on the foot rest.

She was all business as she checked his comfort level.

“Good.” Liam smiled at her. “Thank you, Abby.” She stood up and the scent of flowers that he had first noticed tightened his groin. At least that part of his body was working despite the fact that he didn’t want it to react around Abby. Not that it had ever listened to him around her. Her age and the strength of his reaction to her was another reason he was glad he had enlisted in the Marines. If it was one sided, that would have been different, but he could see her response to him even if she didn’t know what it was. Liam had to protect her even if it was from himself. If he had been living at home, Liam was afraid of what could have happened.

“You’re welcome, Liam. If you need anything just call. My parents can always reach me.”

She leaned over and gave him a short hug. He couldn’t help but notice the softness of her arms and breasts as they pressed against him. She quickly stood and turned away. He swore he saw a light blush stain her cheeks as she waved and quickly stepped down the corridor. He swallowed. The feel of her against him had sent his temperature soaring. He was glad she left so quickly. The tenting of his sweatpants made it obvious what her touch did to him. He was damn glad she was oblivious.

Abby escaped down the corridor, her footsteps squeaking on the faded tiles. The admin offices were in the oldest section of the building. Harsh lighting and faded posters lined the walls. The money went to updated equipment to help the soldiers that were wounded, not sprucing up the offices that housed the tons of paperwork the VA required.

Abby never expected to see Liam here. She’d had a crush on him since she first started noticing boys. Her body started developing and her hormones went haywire. He’d been the one she’d compared all her boyfriends to, and they’d come up lacking. From the electricity that seemed to spark when she touched him, she knew she wasn’t over him. It was obvious to her he didn’t feel the same way. He never had. His nickname for her, baby girl, said it all.

Abby entered the office, glad she had put on a bra today. Her nipples throbbed from the feel of Liam’s chest when she hugged him. The air blasting in the office made it even worse. The scheduler for the department was going through menopause and threatened to kill anyone that changed the thermostat. No one was willing to test her. A former Marine, Peg was still intimidating.

“Hey, Peg. What assignment do you have for me?”

“Abby.” She smiled, waving her to a chair. “A Marine. He’s still enlisted but needs therapy. He broke an arm and both legs and is still recovering from being thrown from an explosion. Had to have surgery on one leg and his arm. He’s being allowed to do therapy at home as long as we can find a live in therapist. You know we’re full up right now. We have been since this damn war started. He’s well enough to go home, but not fit enough to return to active duty. The board decided to have the outreach program fill the gap.”

“Makes sense. Is he too far from the center to do therapy from here?”

“Yes and no. There’s really no one to bring him in daily, and he needs daily therapy. He lives far enough out that taking someone from the ranch would be a hardship for them. Not to mention the bouncing around on the roads would just undo all the good from each session. So, a live in is recommended for now until he improves.”

“I had wondered. How is his attitude toward therapy?”

“He’s on board with it. He wants to get better. It’s just not fast enough, so don’t let him rush it. I guarantee that he’ll try.” Peg laughed. “He’s a typical Marine.”

Abby got a sinking feeling in her stomach. She had a feeling she knew exactly who she would be working with.