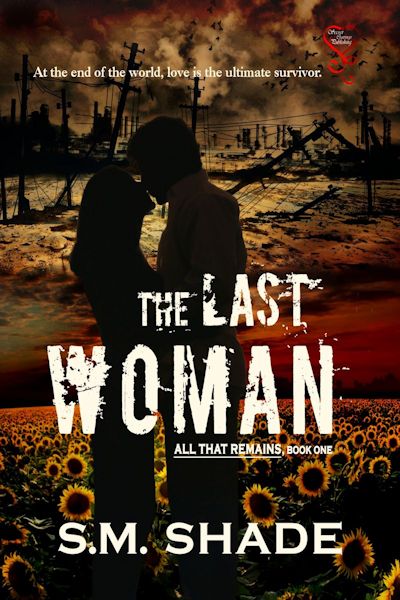 All That Remains : Book One

When Abby Bailey meets former model and actor, Airen Holder, in a darkened department store, romance is the last thing on her mind. A plague has decimated the population, leaving Abby to raise her son alone in a world without electricity, clean water, or medical care. Her only priority is survival.

Traumatized by the horror of the past months, Abby and Airen become a source of comfort for one another. Damaged by her past and convinced Airen is out of her league, Abby is determined to keep their relationship platonic. However, Airen is a hard man to resist, especially after he risks his life to save hers.

When a man named Joseph falls unconscious in their yard, and Abby nurses him back to health, everything changes. How does love differ in this new post apocalyptic world? Can three unlikely survivors live long enough to find their place in it?

“Will you dance with me?” Airen asks, holding out his hand.

I try not to show my surprise as I take his hand and follow him. He changes the song to one of my favorites, an acoustic version of Give Me Love by Ed Sheeran. I try to act normal and hold him the same as I did Joseph, but he smells so good; like citrus and musk. It’s intoxicating.

He holds my hand and slips his fingers between mine, sliding his other arm around my waist and pulling me close. My hand is resting on his shoulder blade, and I can feel the flex of muscles in his back as he moves. My head rests tentatively against his, and I feel the soft tickle of his hair. He keeps me so close, his hard stomach against me. I’m pressed against his chest, trying to control the urge to slide my hand down to his ass. As the last verse starts, he pulls me away from him slightly. He gazes at me, and I’m drowning in those eyes, those dark mesmerizing eyes.

“I don’t know why it’s taken me so long to do this,” he whispers, and then his lips are on mine. Everything ceases to exist. My whole world is dominated by the feeling of Airen’s lips on mine. His kiss is sweet, his lips soft as they move and shift over mine. After a few seconds, the tip of his tongue strokes my lips, and I give in. I kiss him back, and I finally get to taste him, to taste Airen. We deepen the kiss, exploring each other’s mouths as he holds my face in his hands.

I slide my hand up his neck and bury it in his soft hair, as I wrap my other arm around him and press him to me harder. Oh, can this really be happening? Shouldn’t I be waking up by now? My moan fills his mouth as his fingers trail across my breast and stomach to rest on my waist. He sucks delicately on my bottom lip as we finally break apart.

I lean my forehead against his chest and close my eyes. He really kissed me. I kissed Airen. Beautiful, sexy, way out of my reach Airen. He seems to know I need a minute and holds me close, swaying to the music until I ask, “Are you drunk?”

We keep dancing as the next song comes on. I’m completely speechless, and my mind is spinning. I want him so bad. I want to grab his behind, reach under his shirt, rub my hands across his bare chest, and kiss him until I can no longer breathe. I’m fighting to control my urges. I know this is wrong.

I sigh. “I don’t want you to be sorry or regret anything later.”

His hand strokes the back of my head and moves down to rub my back. “I won’t regret anything. Why would I?”

I give him a resigned look. “I’m not the last woman alive. It just seems that way, Airen. There will be other survivors, beautiful women who would happily fight to the death for a chance to be with you. I don’t want to see you settle when things won’t always be this way.”

“Be honest, Airen. Before the plague if I’d passed you on the street in New York, you never would have noticed me. I can never compete with the skinny models and beautiful actresses you’re accustomed to dating. You’re way out of my league.”

He pushes me away from him and stares at me. “Look at me, Abby.”

I raise my eyes, and bite my lip.

“I’m insulted that you think I could be that shallow, as if all I care about in a woman is her appearance. Personally, I prefer a woman with curves.” He runs his hands down my hips. “Still, that’s beside the point. Beauty isn’t the most important thing to me, and besides you’re—”

“Don’t!” I interrupt him. “Please just don’t. It makes me uncomfortable. I have a mirror. I know how I look.”

He holds my head in his hands, and his gaze burns into me. “You don’t know how you look to me. I want you to understand I don’t see you the way you see yourself. I see the woman I love.”

Beverly and Tamara: Welcome to SSLY. Thanks so much for joining us today. So first why don’t you tell us a little about yourself?

Hi, thank you for having me. I’m a 36 year old homeschooling mom with a sixteen year old son. I’m originally from Indianapolis, but I now live in a small town in Kentucky. I am hopelessly addicted to Dr. Pepper, chocolate, sunshine, and men with full sexy lips. Not necessarily in that order.

Tamara: What do you HAVE to have when you are writing?

Pen and paper. I type everything later but I have to handwrite it first. Scratching out a bad sentence is so much more satisfying than hitting delete.

Beverly:When did you start to write, who influenced you?

I wrote poetry and short stories as a teenager, but stopped for some time. I recently rediscovered my love of writing, especially romance.  I can’t say I was influenced by any specific writer, but by my love of reading, and I have my dad to thank for that. He was giving me spelling words, making a game of it when I was preschool age. I started Kindergarten with the ability to read and it fostered a love of books that stuck with me.

Tamara:Whatdo you think are the qualities that make up a “hero”?

Devotion, compassion and an open mind.

Beverly:Can you describe your favorite character?  And which of your books is he/she in? How do you come up with your characters?

My favorite character is Joseph from the All That Remains Series. He is just so sweet and devoted to the people he loves. I start with a picture in my head and the characters pretty much tell me who they are through their actions and dialogue. That is the best I can explain it J

Tamara: What are the hardest scenes for you to write? Suspense?Sex?Dialogue?And why?

Dialogue and sex aren’t as challenging to me as general description. Whether I’m describing a room or nature, I obsess over it. Too much detail? Too little? Maybe I should rewrite it for the 42nd time? Ugh. I’m good at puzzling out a mystery or predicting a twist in a story, but not at writing them. It’s safe to say I’ll never write a mystery.

Tamara: Who would you choose as your “book boyfriend/girlfriend”? From what book?Author?

At the moment I’m lusting over Gideon Cross from Sylvia Day’s Crossfire Series.

Beverly: What is the kinkiest thing you’ve ever done?  Or would like to? What?  We are all about the love!

Maybe not the kinkiest, but I did have some fun on an old fashioned waterbed with a coating of baby oil. It’s harder…erm…I mean, more difficult than it sounds.

Tamara: What are your favorite types of heroines? Do you like the damsel in distress who needs saving or the kick-ass variety? Why?

In between. I like strong heroines who hate to show their vulnerabilities, because you know the right hero will see right through her.

Beverly:What was your worst date ever?

No contest. Pushy jerk who took me to a dive bar and kept trying to shove his tongue down my throat on our first date. I snuck away and had my roommate pick me up.

Tamara:If you were stranded on a desert island, what three things would you want to have with you? (You have food, water, shelter, all the necessities, so nothing mundane)

A Hershey factory, e-reader, and a naked man of my choice.

Beverly: LOL! I never thought of a Hershey Factory! What is your “guilty pleasure”?

Watching The Vampire Diaries and The Originals. The shows are obviously targeted at young girls, but what can I say? I love them. I also tend to have Cadbury Eggs stashed around the house near holidays. They’re irresistible.

Tamara: What dream or goals have you yet to realize?

Well, having my first book published was a biggie. Now I want to see it on a bestseller list. J

Beverly: What was your most embarrassing moment or the craziest thing you’ve done? C’mon dish!

It’s probably pretty tame by most people’s standards. I was with a group of friends and we hopped the fence at a swimming pool in a big apartment complex in the middle of the night. Needless to say, alcohol was involved. We stripped down to bras and panties and the guys down to undies and dove in. It took all of 2 minutes for the security lights to pop on and another 2 minutes for cops to show up. Though we got away, I still wonder how I’d have explained running down the street in wet underwear at 4 a.m. if the cops had found us. Still…good times. lol

Beverly:How do you know you’re in love?

When you are willing to brave morning breath for a kiss.

Tamara and Beverly:Okay. We are SSLY so we have to ask. Who loves you?

My son, even though I occasionally want to choke the teenager out of him.

Now for some quick fun questions:

Tall, dark and handsome or Blond and buff?

Can’t I have both? Please? If I must choose, Dark and handsome. Truthfully, it’s the eyes I really notice first.

A mixture, I don’t think they are mutually exclusive.

Slow, then a little faster.

Let’s leave a little to the imagination, shall we?