GOODREADS GIVEAWAY- Enter to win a set of Autographed Books 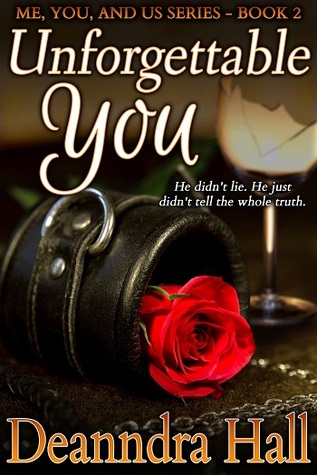 For Sheila, a lie is a deal-breaker. But what if it’s not a lie? What if it’s just not the whole truth?
Being a popular Dom at the nicest BDSM club in town would be the top of the mountain for lots of guys, but for Steffen Cothran, it’s meant heartache. He lost someone he thought he might be able to have a future with to his best friend when Trish Stinson and Clint Winstead patched things up. He knows he wants a relationship, but so far he’s had trouble finding that one person, the one he knows he’s meant to be with, to make that happen.
That all changes when Trish and Clint walk into the club with Trish’s best friend, Sheila Brewster. Even though he’s met her, he never really had much contact with her. But Clint has a plan: He’s looking for a Dom to protect Sheila in case her abusive ex-boyfriend manages to get paroled. And Clint happens to think that Steffen is a great candidate for that position.
Steffen and Sheila’s relationship starts casually and quickly grows into a promising romance. But one question makes all the difference, and when Steffen doesn’t lie but doesn’t tell the whole truth with his answer, Sheila’s left wondering if she can ever trust anyone again. And when Steffen’s little omission shows up on his doorstep in full-blown chaos, the relationship he’d had such high hopes for is shattered, possibly forever.
In the aftermath, Sheila sets a course for self-destruction that turns out to be more dangerous than anyone could’ve imagined. With no one to blame but himself, Steffen finds it hard to help a woman who won’t have anything to do with him.
Two broken hearts. One huge mistake. A few really bad choices. And a lifetime of pain if things can’t be righted. It may be impossible to mend the broken trust, and their love could be lost forever.
The second in the Me, You, and Us series following Adventurous Me, Steffen’s story in Unforgettable You is funny, smart, sweet, kinky hot, and heartbreaking. It’s a tale of what happens when you forget that there’s not a lot of difference between a lie and a partial truth, and what love really means when two people belong together.
WARNING: This book contains explicit sexual situations in graphic detail. Not intended for readers under the age of 18. Reader discretion advised.

Other Books In The Series

“Boring? Tiresome? Predictable? We’ll see about that.”
When Trish’s husband of almost 30 years announces that he’s leaving her because she’s “boring,” she sets out to find an adventure. Her attempt to drink her heartbreak away drops her onto a handsome gentleman who invites her to have an adventure, and Trish can’t help but say yes.
She embarks on that adventure, but her path keeps crossing with that of another – Clint Winstead, a Dominant at the club, Bliss, and the one person in the place who seems to despise her. And that’s fine with Trish. After all, there are plenty of other Doms there who want to play.
But when an annual event at the club throws Trish and Clint together for two weeks, both of them are horrified, not by the pairing, but by the feelings they’re trying hard to deny. As the time passes, it’s harder and harder to deny what they know is true – that is, until one nearly-tragic incident that almost changes both their lives irreparably. And when Trish realizes that continuing on with her commitment could cost her the ultimate – her life – she knows that it has to end. But does it?
Trish is the queen of second chances. But this second chance might just come at a price too high to pay. A little adventure is a good thing, but perhaps she’s gotten far more adventure than she can handle.
WARNING: This book contains explicit sexual situations and BDSM themes. It is not suitable for readers under the age of 18. Reader discretion is advised.

For as long as I can remember, I’ve been a writer . . .
and it has served me well. I wrote for local publications, wrote marketing and advertising materials, wrote for academic publications, and eventually grew jaded with the writing profession as I often watched others take credit for my hard work. I retreated into the world of 3-D art in the fiber and textile mediums and hid out in a world of colors and textures. But, truth is, there was always a story or two in my head. It wasn’t until Nikki and I met in my imagination that I decided it was time to let those stories out, and I’m glad I did. My readers now get to enjoy the fruits of my imagination and, believe me, it runs wild!
On the personal side, I’ve been happily married to my lover and best friend for over thirty years, and I have two wonderful adult kids who’ve blessed me with two excellent choices of life partners. When I’m not writing, I’m playing with my three crazy little dogs, hiking in a local recreation area, kayaking, working out at the gym, tending my herbs, cooking, or doing some kind of research.
But I’d really rather be writing!