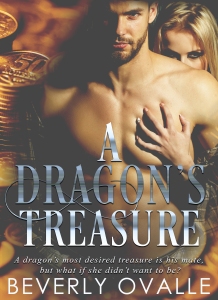 Kai has been hunting for his mate for a very long time. Drawn to a singular place on earth, filled with treasures, he still seeks the greatest treasure of them all. His mate.

Fleeing danger, Connie runs into the arms of destiny, but she has plans already, and a Dragon mate is not on the agenda.

Kai has waited centuries for Connie, and he will claim his mate. Patience may not be a Dragon’s virtue, but he always gets his treasure.

She would make a magnificent dragon. Wrapped in all the gold he could give her, her flesh peeking from beneath. She was his.

He looked over at Ellen, lifting a brow in inquiry.

“Don’t mess with my cousin.”

He grinned. “I’m not. She’s my mate.” Ellen’s eyes widened while Breccan and Maxwell snickered. His eyes wandered down the hall she’d flounced out. She might have meant to look fierce, but her bouncy blonde hair and petite size negated that. Kai wanted nothing more than to follow her and claim her. Her scent was even stronger in the enclosed space than wafting on the breeze. He’d bet she wore a dragon’s mark somewhere on her luscious body. He couldn’t wait to hunt for it.

Breccan chimed in. “By her reaction, I’d say not so great.” He sported a big grin on his face. “Looks like Kai will have a battle on his hands.”

Maxwell’s sly twist of his lips showed he was enjoying the situation too.

Kai glared at them. Damn wolves. They were a pain. He could see the colors in the kitchen change as his dragon attempted to get out. A little barbeque wolf was a tasty snack. The rumble of agreement by his dragon made him smirk. He couldn’t hurt those two, no matter how aggravating they were. Breccan was the only reason Ellen didn’t spend her days wrapped in fear any more. His dragon reluctantly settled down. 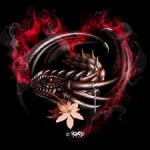