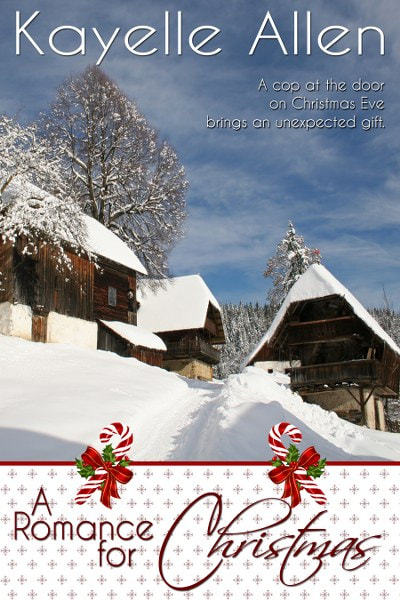 A sweet holiday romance showcasing love, loss, and the spirit of giving.
Can you fall in love again when the love of your life has gone?
On Christmas Eve, the love of Dara’s life passed away in a tragic accident, leaving Dara with their three-year-old daughter. Though insurance paid for the basics, there wasn’t much left. Now it’s Christmas Eve again, there’s no money for a tree, and everything Dara loves has been sold to survive.
A knock on the door reveals a cop, with a gift that will change her entire life.
A romance full of hope, so sweet there’s not even a kiss…
**Only .99 cents!!**
Goodreads * Amazon

“Mommy?” Christine’s young voice broke in on her thoughts.

Dara put down the romance she’d been re-reading, the favorite she’d had since she was sixteen. She’d sold all her others at a yard sale the previous week. “What is it, sweetie?”

“Why don’t we has a real tree for Chribmas?”

“Why don’t we ‘have’,” she corrected. “Come sit by me.” Dara patted the couch and tucked her chenille robe closer around her.

One arm around Matilda, her cloth doll, Christine climbed up beside her mother and cuddled.

Matilda’s going to need stuffing before long. Her head flopped forward, face against her flat chest. When did the lace on her dress get so ragged? Dara smoothed the doll’s dress. “Remember when Daddy went home to heaven before Christmas last year?”

Christine knuckled her eyes and yawned. “I ‘member.”

“And then Mommy got hurt in the car accident and couldn’t go to work?”

Dara took a deep breath. “Well, it meant there was no money for a real tree this year. But I’m sure Santa will still bring you presents.” Gifts Dara bought by selling her entire collection of romance novels at a yard sale at her friend Sherilyn’s house. “And we drew a tree, right?” She pointed at the crayon-bright drawing taped to the wall. Construction paper ornaments decorated each branch.

“How will Santa leave his presents?” Christine pulled away and got on her knees. “He can’t put them under the tree, Mommy.”

“Oh, honey!” She ruffled her daughter’s hair, swallowing the lump in her throat. “Santa will find a way.” She leaned forward and kissed her little girl. “We should get you in bed so he can come. He can’t leave presents while you’re awake.”

She followed her daughter into her room, got her tucked into bed and sat beside her, stroking her golden hair. Christine gazed up at her from under thick dark lashes. Her deep-blue eyes never failed to remind Dara of her late husband.

Jack had been Dara’s high school sweetheart. Tonight marked a year and nine days since the accident that had claimed his death. Neither she nor Jack had family other than each other. His coworkers knew, and they’d helped that first year, bless them. His senseless death happened right before Christmas. What if something happened to her too? As an orphan herself, Dara experienced fear and anxiety for her daughter. Tears of loneliness, terror of the future, of raising her daughter without Jack at her side. Anger at everything and everyone. At his company for sending him on the trip. At Jack for going. Guilt for feeling angry ate at her.

The night Jack had left, they’d argued over it and he’d slammed the door when he left. But then he’d stopped the car halfway down the drive, gotten out, and had come back inside to kiss her and tell her he regretted having to go, but that he had to. He promised he’d be back before Christmas. They’d shared a long, cherishing kiss and she’d waved until he was out of sight.

Six hours later, his plane went down over the Gulf of Mexico in a freak storm. All on board were lost.

More guilt and doubt set in with the New Year. Things she should have said. Should have done. Why had she let him go? Why had God allowed her child to grow up without a father?

Her friend Sherilyn had walked through it all at her side, helping her get a job, watching Christine, being there when all Dara needed was to cry. This year, the company had forgotten Jack and the family he left behind. So much for “The Company with Families at Heart.” Jack’s insurance had paid off the house, and there was enough money to survive for a few months. While looking for a job, she’d sold furniture, her good silver, and pawned all her jewelry, except her wedding ring.

Dara rubbed her face with both hands, willing herself to hold on for her daughter’s sake. To be strong. To be both mother and father. Women had done it for centuries. They’d survived. So would she.

“That’s a great story. My mother used to read it to me when I was little.” Dara snuggled beside her, and opened her daughter’s favorite Christmas book. At least she’d been able to give her the gift of reading. When Jack had been alive, he’d always made sure there was money for books. She would miss her own collection, but at least Christine would have something from Santa. “‘T’was the night before Christmas…”

After Christine drifted off to sleep, Dara pushed off the bed. She was gaining strength daily, and would finish therapy the first week of January and return to work. Disability paid for the basics – lights, phone, water, trash collection, and she’d never bought anything on credit, refusing to dig herself into a hole she’d never escape once it got started.

It’ll be great to have a full income again! I wish it could have come in time for Christmas.

She went to the closet and pulled down a box with a ball, crayons, paper, and three books. Sherilyn had brought over a few things as well. This wasn’t the grand Christmas that Dara had wanted for Christine, but Dara had already sold her other valuables. There was nothing left but her wedding ring.

She didn’t wear it. Removing it had been part of saying good-bye to Jack.

Sherilyn had said it would help, and it had. Sort of. But not much.

Dara sank into one of the kitchen chairs and put her face in her hands.

Sometime later, when the doorbell rang, she grabbed a paper towel and dried her eyes. The clock over the stove said nine o’clock. Who would be calling at this hour on Christmas Eve? She stuffed the wet towel in her robe pocket on the way to the door.

I’m Science Fiction author Kayelle Allen. I did a tour in the US Navy, where I climbed around airplanes fixing black boxes that helped pilots find their way home. I wrote my first novel at 18 but to this day, it’s hidden under my bed, where (trust me) it will remain. Gems from it, however, launched several series in my galaxy-wide universe of stories. From childhood, I was the victim of an overactive imagination and inherited the Irish gift of gab from my mother. From my father, I got a healthy respect for mechanical things. Small wonder I write Science Fiction and Fantasy peopled with misbehaving robots, mythic heroes, role playing immortal gamers, and warriors who purr.
I’m a member of RomVets, a group of military and former military women who write romance. In 2014, I was awarded an honorary lifetime membership to the OutlantaCon Science Fiction Convention for support of the convention since its debut. I founded Marketing for Romance Writers (more about them below), and today it has over 7k members. I also lead a writer’s group in my community. Now that I’m retired, I stay busier than ever. I’ve been married so long I’m tenured.
Website * Facebook * Twitter * Instagram * Bookbub* Amazon * Goodreads * YouTube
#PMInc will provide a 15% discount for anyone that is referred by or mentions
Silver Dagger Book Tours!!
https://personalizedmarketing.info

3 thoughts on “A Romance for Christmas #Tour and #Giveaway”