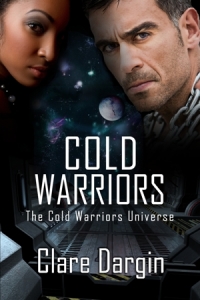 Left in cryogenic stasis for nearly a century, Caitlin Driskoll is awakened and drafted into a war she knows nothing about. Expected to defend a world where her kind is despised and expendable, she discovers love and respect from the one man who can’t be associated with her.

Lieutenant Colonel Medoro Keegan has spent a lifetime in the Marines. With no family to speak of, the Corps and his ship, the USS Blanchard, are all the loved ones he needs…until Caitlin sparks a fire within, that threatens to consume him if he doesn’t walk away.

Will he choose a life of certainty in the only world he knows or give it all to Caitlin and run the risk of losing someone, yet again?

He didn’t know what to say. His first clash with her had distracted him to the point of madness. It had been some time since he’d had such a powerful encounter with a woman. The last one to push his buttons that hard, he wound up marrying.

Caitlin was stubborn, mouthy, somewhat insubordinate, and filled with an innate force he had not seen in sometime. She had no problem in standing up for who or what she believed in. He didn’t like the feelings she stirred in him. He dare not consider them. Especially with her. She was a subordinate and a cryo. It was against regulations for him to even think of starting anything with her.

He shifted his stance. His heart pounded in his ears and breaths quickened. “Ms. Driskoll. I don’t know what you expect from me.”

“Nothing more than I expect from myself.”

Before he knew it, he crossed the distance between them and swept her into a searing kiss. He caressed her body, touching every curve. Arousal sped through his body like lightening. He dug his fingers in her hair and hungrily dominated her mouth, his tongue delving in, playing with hers. Gripping her waist, he lifted her up and placed on her the table. She arched her neck exposing her creamy skin. He nipped and bit at it enjoying its smoothness. He reached up and caressed her breasts, a need filling him to see them, taste them.

He was ready to slip off into oblivion when he remembered himself. It was the middle of the day; they were in a briefing room and would be caught. Breaking off the kiss, he raised his hands in surrender.

“Jesus,” he said in between breaths.

“What?” she panted, as she straightened her uniform.

“Please leave. Just go.” He closed his eyes, wrestling his feelings into submission. Holding them down, he shuddered. Dear God, help me. He needed her so badly. His breathing slowed to a normal rate. When he opened his eyes, she was gone.

“Sir, you’re needed on the bridge,” the voice on the com said.

“Be right there,” he replied, grateful for the distraction.