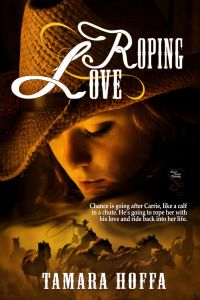 Ten Years ago love slipped through Chance’s lasso. This time “He was going after her and she didn’t stand a chance, just like a calf in a chute, he was going to rope her with his love and ride back into her life.”
Carrie Stewart is a dedicated horsewoman. She runs a successful breeding and training program. She is a good friend, a good sister and a favorite aunt, but she has been burned by love. Carrie has never gotten over her first love, Chance Ryan. After ten years of absence Chance shows back up in her life. Should she risk her heart again, with the man who left it broken at her feet in the past? Chance has some serious work ahead of him to win back the one woman he could never forget.

Excerpt:
Chance felt like he’d been thrown from a bucking bronco. Ten years. He hadn’t seen her in ten years. And it was just like before. God, she was even more beautiful than she had been at eighteen. Time had matured her body, her curves a little fuller than they had been. Her hair was short now, almost boyish in length, but curling softly around her face it looked feminine and flirty. It was a deeper shade of blonde now too, a golden honey color that looked stunning against her sun-bronzed skin. What the hell was she doing here? And who the hell was the kid with her? Chance was busy doing mental math, the kid looked nine or ten. Carrie had called him several times in the months after he left. He’d never returned her calls. Could she have been trying to tell him she was pregnant? No it couldn’t be, she would have told him. Wouldn’t she have?

“I’d say small world, but since it really is a small world and we haven’t run into each other in ten years…”

Carrie arched one eyebrow, he always loved when she did that, it looked so haughty and hot.

“What brings you here?” Chance asked

“Same as you I guess, looking for some brood mares.”

“Actually, we’re selling this mare.” Nodding at the other, nearly forgotten man in the stall. “This is my brother, Chase.”

“Nice to meet you,” Carrie said, looking down at Tyler, “Well, we need to get to the Coliseum, Tyler wants to see the cutting.” Keeping her arm around his shoulders they turned to leave.

“We should talk,” Chance said

Carrie looked over her shoulder and stared him straight in the eye. “I think the time for talking is long past.”

The phrase she was so mad she could chew nails and spit screws ran though his mind at her look. Damn. He had really fucked things up between them. Why hadn’t he taken her calls again?

Oh, yeah, to give her a chance at a good life.

“I really need to talk to you.”

“There’s nothing left to say.”

Want to find out what happens next?

Get your copy of Roping Love at the following retailers

In honor of my release I am giving away an e-copy of Roping Love to one commenter.