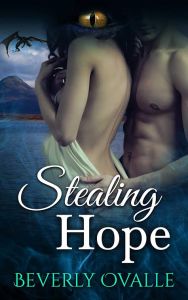 Ari pulled Hope against him.

Hope gasped at the feel of his body against hers.

He ran a hand down, from her hips to her bottom, sliding a hand over her curves. His large hand cupped her cheek and his fingers slid, touching her heat. His calloused fingers were right there, coated with the moisture he drew from her.

Hope cried out while Ari teased her with the tip of his finger.

Hope drowned in the sensation. She tilted her hips, unconsciously asking for more. Ari slid a finger in, stroking her softly. The glide of his finger, rough and calloused, called more moisture from her.

Her pussy tightened on his finger, swollen and slick. Her womb clenching in desire. Hope’s nipples tightened into hard buds, but all her concentration was on the sensation Ari drew from her.

Ari shifted, positioning Hope against his shaft, rubbing against the bundle of nerves she didn’t know she had. She strained toward him, moisture coating his shaft from her cunt.

His finger seated inside her sent her spiraling.

Hope cried out, the sensations bursting inside of her.

“Oh!” Her head fell against his chest.

Ari slowly withdrew his hand from her body.

Hope shuddered. “What did you do to me?”

Ari held her tight; his turgid erection throbbed against her. Hope wrapped her arms around his waist, content to stand in his arms feeling bewildered yet sated.

“Are you okay?” Ari whispered above her.

Hope nodded her head. Ari was warm against her, contrasting with the cold of the water. Shifting, Hope realized her leg was beginning to throb.

“My leg is starting to hurt. I think I need to sit down.”

Ari swung Hope up into his arms and strode out of the water. They neared the fire only to see Crag lying to one side, a snore rising from him.

“I forgot about your brother. You don’t think he saw, do you?” Hope buried her head in Ari’s neck. “You can’t do that again.”

Ari’s arms tightened around her.

“Ari, when are you going to take me home?”

Ari settled down on top of a rock, still holding Hope. “Not tonight.” He attempted to pull Hope’s shirt off.

Hope fought to keep it on.

“I can’t sleep naked next to you.” She glanced at Crag. “Not with the two of you here.”

“Well, you can’t sleep with it wet either.” They were playing tug of war with her shirt, but Hope was determined to keep it on. “Fine, how about I let you wear my shirt. Will that work?”

Hope stood gingerly, resting her weight against the rock. She watched Ari reach in his rucksack and pull out a shirt. Her insides tightened. He was a magnificent sight, thick hard muscles, round butt. There wasn’t anything Hope didn’t admire about his body. Warmth pooled low in her abdomen and moisture gathered between her legs while she watched him. His balls hung low and heavy between his legs, just a glimpse when he leaned over. She’d heard her sisters talk, but hadn’t had any interest in men until Ari.

He stood up and turned around smiling at her.