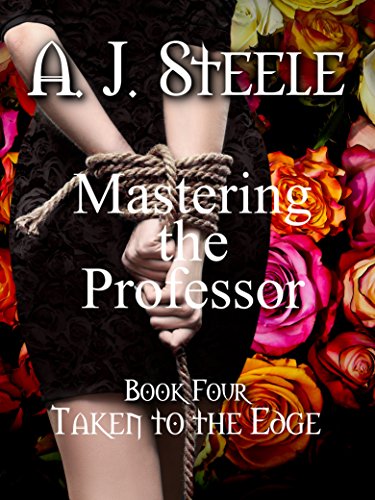 Taken to the Edge

Available NOW for pre-order at:

Emma Burke is at her wits’ end. Gage is out of town for three days. Three days of being constantly plugged, edged and tormented through and endless series of kinky tasks designed to keep her at the peak of arousal without allowing her to come. By the end of the first day Emma is so frustrated, she’s not sure she’s going to survive. As she performs the tasks, each more diabolical and arousing than the last, controlling her orgasm becomes more and more impossible. But she’s determined to succeed.

Because more than anything she wants to please him. He is rapidly becoming the most important thing in her life, a thought that frightens the hell out of her. Because even though he’s in it only for the sex, she’s beginning to want more. Much more.

“Challenging,” was her sarcastic response. “As I’m sure you know.”

He laughed. “I’ll just bet it was. I meant it to be. I want you to get used to orgasm denial. It’s one of my favorite ways of keeping a sub excited, anticipating, ready. I will use it often. I want to thank you for the extremely sexy videos. They got me so hot and bothered, I had to jack off four times today after watching them.” He didn’t tell her that, as climaxes went, they had been less than satisfactory because he wasn’t coming inside her sweet, sweet cunt, feeling her hot walls contracting around him, milking the cum out of him. Because he wasn’t hearing her sighs and groans and little cries of ecstasy as she gave herself up to the pleasure he’d given her.

Gage moved back from his computer, revealing for the first time that he was sitting in a rolling desk chair, fully clothed in a black Versace power suit. But his belt was unbuckled, his pants were unzipped, and his hand was fisted around his cock which was stiff and hard and a dark, angry, mottled purple color. He was stroking himself slowly up and down.

He was rewarded by the look of sheer lust that took possession of Emma’s face as her gaze locked onto his groin and the provocative movement of his hand. Unconsciously her eyelids fell to half-mast. Her mouth opened and the tip of her tongue came out to swipe across her lips.

Gage’s eyes narrowed. His cock jerked as if it, too had felt the touch of her tongue. Jesus!

“Spread your lips, pet. I want to see my luscious pussy.”

He watched as Emma reached both hands between her legs and pried her outer labia apart, revealing her entire slit from her anus at the bottom to her clit at the top. Her arousal was pouring from her, slow and sticky like honey, making Gage’s mouth water.

“God, Professor, you have the sweetest pussy I’ve ever seen. So pink and wet and swollen. I wish I was there with you, licking you. Sucking that sweet little clit. Fucking you with my tongue. Letting your scent wash over me until I’m drunk with it.”

She groaned. Her head fell back and her eyes closed. Her right index finger twitched, and it took every ounce of control she possessed to keep from sticking it out and circling it around her clit. She needed an orgasm in the worst possible way, but she didn’t dare touch herself.

“Have you had an orgasm today?” he asked.

Her gaze was clear. She was obviously telling the truth. Odd how relieved that made him feel.

“Good girl. I’m proud of you. Take your right hand and play with your clit, little sub.”

Still holding her lips open, she moved her right index finger to her hard little nub and began moving it in a slow, lazy circle. She was so close to the edge the stimulating touch swiftly took her right back up to the peak. Her back arched and she sucked in her breath.

Somehow she managed to snatch her hand away, just in time. Her clit, suddenly deprived of its source of pleasure, throbbed with unfulfilled need. A need so painful, it made her groan.

“Yes, it was,” he smirked. “I just wish I could have been there to watch. I love tormenting you. All right, Professor. Present Ass.

Grunting with effort, Emma rolled over onto her belly and pulled her knees up under her, spreading her legs and raising her hips in the air.

“Tell me more about it.”

Emma bit her lip. Although he couldn’t see her face, her hesitation told Gage this was not an easy topic of conversation for her. “We only did it two times. He didn’t prepare me in any way—at least not the way you’ve been doing. He just dribbled spit into my anus, spread it a little with his fingers, and pushed himself in. It hurt like the devil. Fortunately, he wasn’t nearly as big as you are.” She paused. “The first time he got soft and couldn’t finish. He-he was so embarrassed. Apologized profusely. The second time, about a week later, he didn’t even bother with any kind of lube. Not even spit. And when I started crying because it hurt so bad, he lost his erection and was very contrite. He never tried it again after that.”

“So he never came inside you?”

“Have any of the plugs I’ve used on you so far hurt you in any way?”

“Only when they reach the widest part going in. Once they’re inside, they don’t hurt at all. They just…make me constantly aware that there’s something in my ass.”

He smiled. “Then they have served their purpose well. Are you ready for your next task?”

“You may rise and sit on your legs. Open the box on the bed beside you.”

Lifting her upper body off the bed, she settled back onto her legs and reached for the white gift box. It was wrapped with a purple ribbon. She untied the ribbon and lifted the box lid, parting the tissue paper to reveal what was inside.

A stainless-steel butt plug with a purple jewel in the end, a tube of lube, a flogger with short suede strips, and two glass cylinders with suction cups at one end. Nipple extenders. Lifting each item out of the box, she laid them on the bed beside her, then turned her head to look at the computer. Gage was watching her, still pulling on his cock with the same slow, measured stroke.

“Lube up the plug and insert it into your ass hole, Professor. It is larger than the plug you wore all day, although still not nearly as large as my cock. Not yet, at any rate.”

Emma picked up the tube, unscrewed the cap, and squirted a dollop onto her right index finger. She resumed the Present Ass position and circled her anus with her slippery finger, slipping it in and out to spread it around inside. Leaning forward in his chair, Gage watched as she repeated this several times, until she was fucking herself with two fingers.

Emma gathered up lube on her ring finger and, tucking it between her other two, somehow managing to get it inside her anus as well.

“That’s my dirty little girl,” Gage crooned, the rhythmic pulls on his cock increasing in pace and intensity. “Fuck that sweet ass with your fingers. Pretend it’s my cock fucking you there.”

Suddenly he stayed his hand, gripping his cock tightly around the base, squeezing hard to prevent the orgasm that tingled at the base of his spine, threatening to consume him. He closed his eyes. Sweat beaded on his forehead and he held his breath, waiting as his climax slowly, reluctantly receded. Jesus! That was close!

He could have come. He knew that. After all, he wasn’t under a regime of orgasm denial. But he didn’t want to come until Emma was looking at him. Until she was watching his seed spurting out of him, desperately longing to be receiving it as her body clenched in similar pleasure herself. Except the only clenching her body was going to be doing was in the sheer frustration of a denied orgasm.

He permitted himself a small smile of satisfaction. By the time Saturday night came, she would be so ready to come, she would explode around him in a climax that would be glorious to watch and even more glorious to feel as her muscles pulled him into his own climax. He could hardly wait.

“All right, Professor. Insert the plug.” 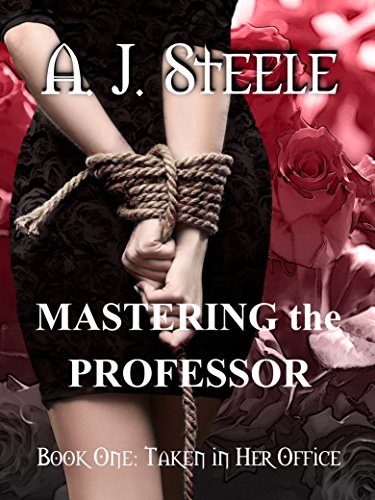 TAKEN IN HER OFFICE

MASTERING THE PROFESSOR, BOOK ONE

The moment Gage Rutherford enters Professor Emma Burke’s office she knows she’s in for a wild ride. Because Gage Rutherford, highly successful businessman, is the super-sexy Dom whose eye she’d caught, and from whom she’d fled, four nights ago at Club Illusion. The very same super-sexy Dom she’s been dreaming and fantasizing about ever since.

He wants her. Desperately. And he’s willing to go to any lengths to have her any way he can get her. In the office. In the dungeon. In the elevator…the club…the woods…

Fortunately for Gage, she wants him just as badly. But he is way out of her league. Will submitting to this hard-edged Dom bring happiness? Or heartache?

TAKEN ON THE DINNER TABLE 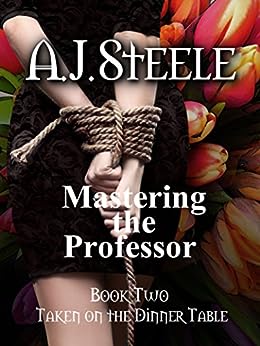 Having fallen under the spell of super-rich, super-sexy Dominant and avowed sadist, Gage Rutherford, Professor Emma Burke agrees to have dinner with him the night after he commandeered both her office and her body and took her bent over her own desk. After all, she keeps telling herself. It’s just dinner, right? In a crowded restaurant full of people. What could possibly go wrong?

When she discovers that dinner is not in a restaurant, but at his house, and she is the dessert, well… Is it too late to turn around and go back home? 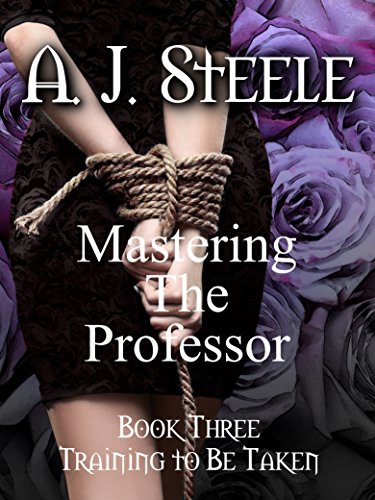