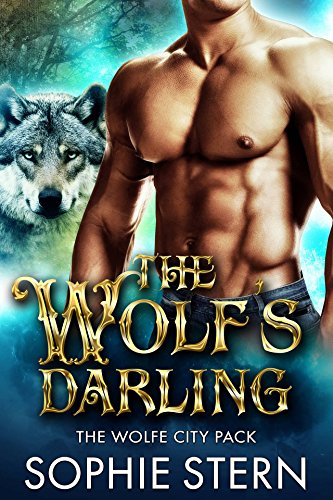 When Amy’s car breaks down in the middle of nowhere, she’s not exactly thrilled to have to stay the night in a small, creepy town. Wolfe City isn’t exactly “on the map,” and everyone sort of freaks her out. The way people are looking at her is like they want to devour her, and not in the physical way.

Amy’s never felt as much sexual tension as she has since she arrived in Wolfe City and she’s not exactly sure what to do about it.

Adam Hart has been looking for his life mate since the day he turned 18, and now he’s scented her. Amy might not be a shifter and she might not be anything like he expected, but she’s his mate. He’s positive.

*This romance takes place in the fictional town of Wolfe City and features sexy shifters and the humans who love them. HEA.*

Forged in Desire by Brenda Jackson is just 99¢ for a limited time only!

Strong enough to protect her. Bold enough to love her.

When good girl Margo Connelly becomes Lamar “Striker” Jennings’s latest assignment, she knows she’s in trouble. And not just because he’s been hired to protect her from an underworld criminal. The reformed bad boy’s appeal is breaching all her defenses, and as the threats against her increase, Margo isn’t sure which is more dangerous: the gangster targeting her, or the far too alluring protector tempting her to let loose.

Though Striker’s now living on the right side of the law, he’s convinced his troubled past keeps Margo out of his league. But physical chemistry explodes into full-blown passion when they go on the run together. Surrendering to desire could be a deadly distraction—or finally prove that he’s the only man qualified to keep her safe, and win her love.

I’ve always been a healer, a saver of lives, until the day my life is taken from me. A drunk driver destroyed my life and got away with a slap on the wrist.

Where children used to be happy to see me, they now run from me.

I want him to pay, to suffer just like I’m suffering. I want him dead.

I used to be scared of my neighbor. But since the switch in me is flipped and I’ve become this monster, I’m drawn to him like a moth is drawn to a flame. He’ll burn me – just like the flame will turn the moth into nothing but ashes – and I’m okay with that as long as I get my revenge.

I deal in death. Killer. Assassin. Mercenary. I go by many names.

I miss the smell of baking that used to come from her apartment. I see the hate festering in her eyes, killing the light that shone so bright. It lit the darkness in me.

I used to be a killer until that car hit her. It woke something in me, a need to save her.

How does a wolf save a lamb without the darkness in him devouring the little light that’s left in her?

*** This is an over the top, insta-love, hot as hell HEA with a twist of kinkiness. HEA are always more satisfying when the characters have to fight for it. If you’re looking for a jaw-dropping, panty-melting page turner then jump right in. This is a Standalone Novella with NO cheating. ***

Dark Lovers on sale for 99¢

Raina wanted what every female wanted…As the only daughter of the vampire king, and a wolf shifter she was given everything she could ask for. Sheltered her entire life. Until her world was turned upside down as she was kidnapped to become Satan’s consort.

Creed was equal parts good and bad, or so he said…Being the son of Satan and an angel, he lived a life filled with death and battle. Each he excelled at, until he saw something he’d die for. Raina Cordell, his Chosen.

What would you do to save those you love? For Creed, he’d give up his eternal soul to the very being who’d relish in his blood. Raina had searched for hundreds of years for what her parents had, thinking never to find the one being who would complete her. Just as she finds him, she has a choice. Her life, or his. Will they survive the coming battle, or will the battle be more than either are willing to sacrifice?

The son of Satan and an Angel finds his Chosen in the last place he’d ever thought…his father’s chambers. A vampire/shifter hybrid stolen from her bed, Raina was sure her life was over, until she meets Creed, the son of the devil himself, now she’s found a reason to fight…her Hearts Love.