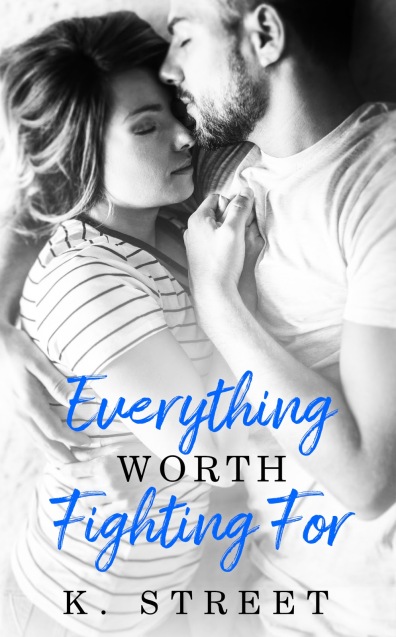 Title: Everything Worth Fighting For
A Jaxson Cove Standalone
Author: K. Street
Genre: Contemporary Romance
Release Date: January 11, 2019
Blurb
Fate.
Destiny.
Whatever you wanted to call it, Macy Caldwell was mine.
She had a chance to get out of this town, but she refused to take it.
She was going to give up everything for me.
I wasn’t worth that kind of sacrifice.
In order to save her, I had to break her.
The night Nash Masters broke my heart
was the catalyst for the ruin that came after.
All these years later, he was fighting for my forgiveness.
He had no idea I was the one who needed his.
The truth didn’t always set you free.
They said love conquered all, but this was war.
And everything worth having was worth fighting for.
ADD TO GOODREADS

Author Bio
K. Street has been making up stories since she was old enough to talk and began writing at the tender age of eleven. She resides in central Florida with her husband and daughter, as well as a tiny menagerie of pets; including a dog, a cat, and a bearded dragon. K is a foodie with an affinity for coffee, peach Moscato, and dark chocolate. When she isn’t plotting her next story K enjoys reading, spending time with her family and cheering on her favorite hockey team, the Chicago Blackhawks.
Author Links
FACEBOOK
INSTAGRAM
BOOKBUB
AMAZON