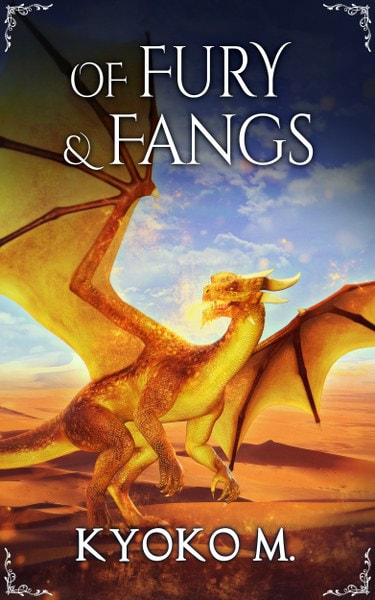 Of Fury and Fangs
Of Cinder and Bone Book 4
by Kyoko M
Genre: SciFi Fantasy Romance

Someone wants Dr. Rhett “Jack” Jackson dead.
After surviving a vicious attack from a dragon in his own home, Jack and Dr. Kamala Anjali investigate who sent the dragon to kill him. Unfortunately, their list of enemies is long. Plenty of people have an axe to grind with the two scientists responsible for the rebirth of the previously extinct dragons that are now flourishing on every continent of the planet. Jack and Kamala rejoin with their team at the Knight Division to hunt down the culprit and put an end to their revenge scheme once and for all.
But will it cost them everything?
Of Fury and Fangs is the fourth novel in the Amazon and USA Today bestselling Of Cinder and Bone series, following Of Cinder and Bone, Of Blood and Ashes, and Of Dawn and Embers. 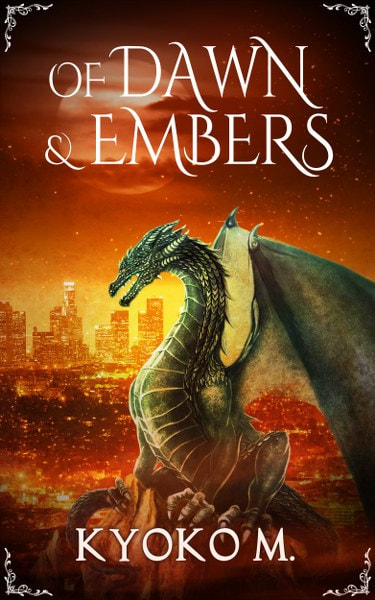 Of Dawn and Embers
Of Cinder and Bone Book 3

It’s been six months since Dr. Rhett “Jack” Jackson and Dr. Kamala Anjali had their dragon cloning project shut down by the government. Just when they think they’ve gotten their lives back together, an agency within the government hits them with another suckerpunch: a criminal organization has cloned dozens of dragons in order to hold vicious dragon fighting rings. The government recruits Jack and Kamala to help them track down the organization. Jack and Kamala set out to put a stop to the illegal fights before any more dragons die…or worse, escape.
Of Dawn and Embers is the third novel in Kyoko M’s sci-fi/contemporary fantasy series, following Of Cinder and Bone and Of Blood and Ashes.
Goodreads * Amazon 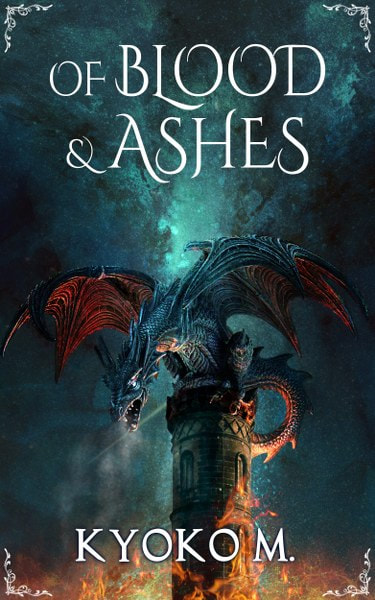 Of Blood and Ashes
Of Cinder and Bone Book 2

The world’s deadliest dragon, the infamous Baba Yaga, is loose on the streets of Tokyo.
Dr. Rhett “Jack” Jackson and Dr. Kamala Anjali have been tasked with helping the government take down a dragon the size of a Tyrannosaurus Rex after it sends part of the city up in flames. Things worsen when they lose track of dragon in none other than Aokigahara, the Suicide Forest–a section of woods in Japan that is rumored to be one of the most haunted places on earth. They’ve also got the yakuza who cloned the dragon hellbent on getting her back, and they don’t care who they kill in order to re-capture the dragon.
Jack and Kamala are joined by CIA field agent William Fry and dragon-hunting expert Juniper Snow as they infiltrate the forest to hunt the dragon before she can hurt anyone else. Between the ruthless yakuza hot on their trail and the growing mistrust in their small hunting party, it will take a miracle for Jack and Kamala to make it out alive…

Of Blood and Ashes is the second book in the series, following the Amazon bestselling Of Cinder and Bone. 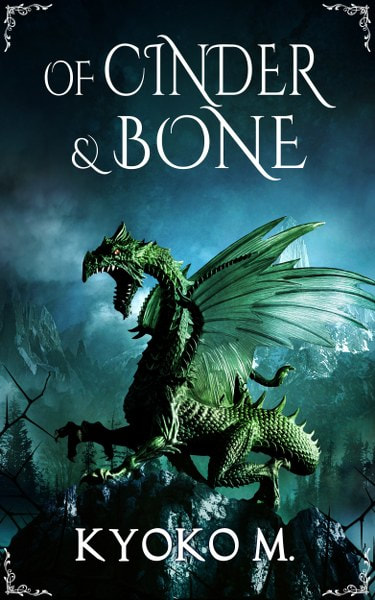 OF CINDER AND BONE is Ron Howard’s Ransom meets Michael Crichton’s Jurassic Park!
After centuries of being the most dangerous predators on the planet, dragons were hunted to extinction. That is, until Dr. Rhett “Jack” Jackson and Dr. Kamala Anjali cracked the code to bring them back. Through their research at MIT, they resurrected the first dragon anyone has seen alive since the 15th century. There’s just one problem.
Someone stole it.
Caught between two ruthless yakuza clans who want to clone the dragon, Jack and Kamala brave the dangerous streets of Tokyo to steal their dragon back in a race against time before the world is taken over by mutated, bloodthirsty monsters that will raze it to ashes.
Of Cinder and Bone is an all-new sci-fi thriller from the author of the Amazon bestselling Black Parade novels. Don’t miss out on this explosive first-in-series! Fans of Westworld, I Robot, Pacific Rim, and Reign of Fire will fall in love with this mashup novel that opens up a whole new world of possibilities into what we know and love about dragons.

**FREE at Amazon and Smashwords!!**
Add to Goodreads
Amazon * Smashwords

Kyoko M is a USA Today bestselling author, a fangirl, and an avid book reader. She has written the Amazon bestselling Black Parade urban fantasy series as well as the Of Cinder and Bone science-fiction dragon hunting series. She has a Bachelor of Arts in English Lit degree from the University of Georgia, which gave her every valid excuse to devour book after book with a concentration in Greek mythology and Christian mythology. When not working feverishly on a manuscript (or two), she can be found buried under her Dashboard on Tumblr, or chatting with fellow nerds on Twitter, or curled up with a good Harry Dresden novel on a warm Georgia night. Like any author, she wants nothing more than to contribute something great to the best profession in the world, no matter how small.
Website * Facebook * Twitter * Bookbub * Amazon * Goodreads

2 thoughts on “Of Fury & Fangs ~ #Booktour and #Giveaway”