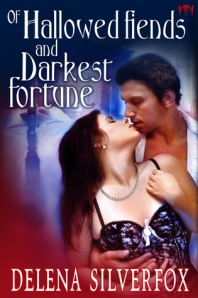 Blurb:
She is the spoiled only child of a wealthy country lord, with a reputation as “used goods.”

After rumors of her running wild at night with a commoner in taverns, Anya is drugged and forced to wed the Duke of Eodel, the wealthiest and most powerful Lord in the kingdom. When he strips her naked and whips her through the streets of Eodel for the marriage procession, she is humiliated. After weeks in his dungeons, her defiance is exhausted and she despairs at her fate. Once she is delivered to her nuptial suites and locked inside, Anya comes face to face with the darker side of her new husband.

He is a cynic and a sadist.

More than his reputation was on the line when the Duke of Eodel wed the lowly Earl of Allimor’s strumpet daughter: untold wealth was his for the taking. All it would cost him would be to wed a wild, spoiled brat in the habit of throwing tantrums when she didn’t get her way. In his cruel instruction he finds the pleasure he always derived from a woman’s pain as she slowly broke beneath his ministrations, but with Anya he finds something troubling. As she goes deeper into her own surrender, her beauty and passion move him…

Bio:
For as long as she can remember, Delena Silverfox has always loved writing more than anything. When she was three she taught herself how to read with alphabet magnets and her trusty Speak n’ Spell, but it was when she realized she could use those same words to share what was in her imagination that the magic took hold.

She pursued an English/Creative Writing degree in college, but after seeing so many friends lose their passion in school, she changed her major to Psychology and pursued writing on her own. At 21, she moved to Portland, OR where she spent the next eleven years, and considers that the city where she truly “grew up,” as it influenced so much of who she is today as a person and an author.

Delena is giving away a $5.00 gift card to Naughty Night Press. Leave a comment with your e-mail address and fill out the Rafflecopter to be entered to win!