You are the winner of the Barbara Vey Luncheon SWAG pack and goodies!

What happens when fire meets ice?

Ice had traveled the realms for centuries searching for the ice elementals, others of her kind but she was alone always alone. Never staying one place for long because sooner or later her mere presence caused the temperature of the land to drop to a killing freeze. Until she found the one place her powers had no effect. And perhaps the one being who could counter her freeze.

Running from a destiny not of his own choosing, Arch finally found the one person who could make him stop running. But Ice must never learn the truth. A fire demon destroyed her world and he was his father’s son.

This is a graphic fantasy new adult romance that contains violence suitable for 18+ this work has also been previously published but has a new cover, illustrations and additions.

I received this book in exchange for an honest review.    First let me say I liked it very much.  Elemental beings intrigue me.   At first we learn about Ice and her journey. . . I did not feel the story at this point.   Then we learn about Arch.   Holy molly, talk about opposites. . .and there is instant fire in Arch’s gaze and it is getting very cold in here.    I am now fully engrossed in the story.

Did you know that Ice can burn you just as badly as fire?   Next bring in Abadone.   You learn to hate him.   I think this will turn into an awesome series.  I cannot wait for the next book. . .  What?  No I am not telling the ending, though some other reviews probably will hint at it.  I can not wait to meet more of these elementals.   Very nice read and at 116 pages a fast read.  Now I wait for book 2!  There has to be.  LOL 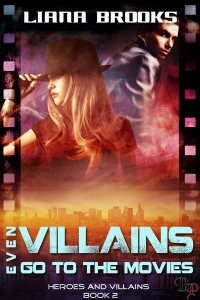 Choosing between good and evil has never been this much fun.

When your mother is America’s Superhero Sweetheart and your daddy’s the Number One Super Villain, you grow up feeling a little conflicted.

Angela Smith has superpowers—nothing that will ever make her comic-book famous—but her ability to psychically sense and manipulate the emotions of people around her has drawn unwanted government attention. Forced to choose between her quiet life as a teacher under constant surveillance or the life of a rogue, she chooses the latter. She plans to hide out in sunny Los Angeles where being a blue-eyed blonde won’t make anyone bat a false eyelash.

Silver screen star by day, superhero by night, Arktos is a triple-threat. He can fly, freeze anything, and see glimpses of the future, all of which he needs to keep the city of Los Angeles safe, but which does nothing for his social life. When a frightening vision of an explosion leads him to rescue a damsel in distress, he finds himself trading Shakespearean insults with a rogue.

Angela knows just how dangerous well-intentioned superheroes can be: one tried to kill her family when she was young. Arktos knows he should hand the rogue over to Company justice; it’s not safe for someone like her to be in the middle of a fight.

But they can’t seem to stay apart. And together, they just might be able to melt all the obstacles standing between true love for a hero and a villain.

Excerpt
Angela tossed the red curls of her wig and parked Luiz’s bike in the alley behind the conference center. She hadn’t put on her Rage getup since arriving in LA, but tonight the mental screams of terror echoing from the center warranted the kind of investigation that would attract questionable attention.
Tight black jeans, a bright red tank top that matched her hair, and a leather duster that was too heavy for the L.A. heat were a start. She’d added a black domino mask that obscured the shape of her nose and cheekbones when she’d moved to New York, because no one needed to see their favorite school teacher beating down the local thugs. The heart and star pendant around her neck— a little invention of her Daddy’s that would shield her from most things—completed the outfit.
The ‘most’ still worried her some days.
Terror radiated from the building, escalating until the headache tearing into her brain was a living fire. Whatever was happening, she would hit back. Hard.
Checking to make sure the alley was empty, Angela sauntered towards the back door and hoped someone inside had been kind enough to leave it open. More often than not the people hired to cater at these places would stick a rock in the door to keep it from locking every time they slipped out for fresh air.
If not she could always pick the lock. Angela sighed. The whole point of moving away from her sisters was to avoid a life filled with crime and superheroes.
Angela reached for the door and someone hit her. A breeze ruffled her wig and she found herself on her back in the alleyway, staring up at a masked man. No hate tainted the aura around him, nothing that suggested that he was dangerous except that he was bigger than her.
She raised an eyebrow. “Hello?”
The man took a deep breath. “Hi.” He smelled like mint.
“I’m new to the area, so I’m not familiar with the protocol when you’re jumped by a masked man in an alleyway. Is there a secret handshake or something?” she asked, sarcastically.
“I’m here to save your life.”
Angela looked around for signs of danger. The man was the only thing in the alley, and he was cradling her, hand cushioning her head, muscular arms suspending him in a pushup so his body weight wasn’t resting on her.
“Right. What danger am I in, exactly?”
“The door is going to explode and kill you,” he said in a very serious tone.
She lifted her head to peer over his shoulder at the door. It was a mistake. The movement meant gyrating under him in his spandex suit, and she caught a whiff of cologne, soap, and clean sweat. His emotions shifted, becoming tinged with desire and arousal.
Angela cleared her throat and lay back down, trying to put space between herself and her captor. “Mm hmm. Tell you what, let me up and I’ll help you find your doctor. I bet someone is very worried about you missing your medicine.”

Liana Brooks would like to SCUBA dive Europa (that moon around Jupiter), but with the NASA shuttle program shut down she’s resorted to writing science fiction instead. She likes southern beaches, warm weather, sharks, and striped socks. Her superhero romance series started with EVEN VILLAINS FALL IN LOVE and continues with EVEN VILLAINS GO TO THE MOVIES. For those who prefer their romance without a side order of spandex she’s written PRIME SENSATIONS (part of the Tales From the SFR Brigades anthology) and FEY LIGHTS.

You can find Liana on the web at www.lianabrooks.com, on Twitter as @LianaBrooks, or on Face Book under the same name.