The Heartbreaker (Hearts of Braden #2) 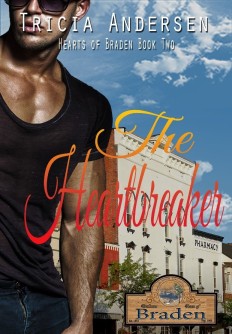 Braden, Iowa is the last place on earth Reese Cooper wanted to be but a devastating injury in the octagon forces the MMA fighter back to the small town he once called home. He barely steps foot on Main Street before he is reunited with Lily Dixon, the town librarian and the girl who possessed his heart since they were in kindergarten.

Every day in Braden is the same for Lily Dixon. That is until Reese Cooper walks back into her life. With his chiseled, perfect body and dreamy blue eyes, he steals her heart just like he did when they were kids. His kisses, his touch are far better than any fantasy she’s ever had. Is she willing to risk everything when her preacher father finds out about her love affair with the town bad boy? And what will happen when Reese goes back to Vegas, leaving her alone in Braden without him?

Both women turned as there was another knock at the door.  “Miss Dixon?”

The high school boy with blond hair and wire rimmed glasses peeked his head around the corner.  He had nearly as many freckles as Molly.  “Miss Dixon, a gentleman has asked your help looking for a book.”  Elijah’s voice dropped to a near whisper.  “I think he’s one of those guys in those MMA magazines.  He sure looks like it.”

Lily felt her mouth go dry.  She fought to find her voice.  “You can help him, Elijah.”

“He asked for you specifically, Miss Dixon.”

Lily slowly exhaled.  Her heart started to pound again as her knees went weak.  “All right, Elijah.  I’ll be there in a moment.”

“Thanks.”  Lily forced a weak smile on her face as she slipped out of her office and followed the boy between the shelves.  She stopped dead in her tracks as she reached the circulation desk.

Reese leaned against the desk as he thumbed through a book.  Activity in the library had stopped as everyone stared at the town legend.  He glanced up at her.  The smile he flashed at her was simply dazzling.  Lily cleared her throat.  “Can I help you?”

Reese set the book back on the desk.  “Well, Miss Dixon, I would like to check out a book to read while I recuperate.  I was hoping you would have a suggestion.”

Lily lost herself in his blue eyes for several moments before shaking herself free.  “What are you interested in, Mr. Cooper?”

He shrugged.  “Sports.  Mystery.  Horror.  Something fictional.  Facts and figures bore me.”

“Why don’t we start in the horror section and see if something tickles your fancy there?”

She led Reese past tables of gawking teens towards the back of the library.  They weaved in between the rows and rows of shelves until they reached a set labeled “horror”.  Lily breezed her finger across the spines.  “There’s good old Stephen King.  Or maybe you’d be interested in an author like Jack Ketchum.”

Lily slowly exhaled as she felt her temper rise.  He doesn’t have to mock me.  “I suppose.”

She caught the gasp in her throat as he pressed tight against her, her skin able to make out the hard contours of his body.  His breath was warm on her neck as he brushed a curl off her shoulder.  “I know there’s something that can tickle my fancy in this aisle.”  He reached over her and tugged a couple novels off the top shelf.  His lips brushed the curve of her ear as his hand settled at his side still clutching the books.  She shuddered at his touch.

“I’ll start with these,” he breathed.

“Let me go check them out for you,” she struggled.

Lily rushed to the check out desk sensing Reese on her heels.  Her thoughts were a scramble.  Did he just kiss her ear?  Did he want to kiss her?  Of course he didn’t.  He had to have a girlfriend wherever he used to live.  Las Vegas, wasn’t it?  She was probably some gorgeous show girl who could rock his world in the sack.

Lily stopped short at the thought of Reese Cooper having sex.  Moments later the real deal collided into her.  It wasn’t the first time she thought of it.  Normally though, she was the girl having sex with him in her imagination.  Hours and hours of sex.  Her cheeks burned again at the reminder. Reese wrapped a protective arm around her.  “Are you all right?”

“Yeah.  Just fine,” she gushed, grabbing the books from his hand.  She slipped behind the desk and flipped each book open.  “Library card?”

The stunned look on his face grew slowly into a wide grin. He tugged her to him and placed a deep, hot, triumphant kiss on her lips.

She melted against him, breathing in his masculine scent, as his hands trailed up her back and undid the clasps of her bra.

Pulling from her, he tossed it and her blouse on the floor. His hands gently cupped the soft mounds in his large hands, his thumbs grazing her soft pink nipples. His eyes were glazed over as he stared at them, licking his lips. “Lily, you’re so beautiful,” he murmured. Reese let them go then slid his hands down her ribs to the zipper of her skirt, quickly releasing it and letting it drop to pool at her feet.

Lily bit back her huff of disappointment. The thought of Reese’s mouth on her breasts made her heart flutter.

After barely a touch, he moved on. He dropped to his knees before her and hooked his fingers into her panties. He looked up at her, a mischievous glimmer in his eyes. “Don’t worry, Lilybug. I’m going to spend plenty of time on those. But I need you naked in my bed right now. You have no idea how much I need it. I’m so hard it hurts.” He tugged her underwear off, nudging each ankle for her to lift her feet. He tossed the rest of her clothes in the corner then raised himself until his eyes locked with her heart tattoo. He gently kissed it, lapping his tongue over the sensitive flesh.

She trembled at his touch.

Reese rose to his feet and tugged his shirt over his head.

Lily moaned as her eyes wandered over his sculpted chest, his perfect biceps, the soft trail of fuzz that grazed his chest down to the waistband of his jeans.

By the smirk on his face, she knew he heard her. He made quick work on the fly of his jeans, dropping both them and his briefs to the floor, then kicking them into the corner with her clothes.

Her eyes darted away as her cheeks flamed. She couldn’t look. She was a good preacher’s daughter…

Reese tugged her to him, turning her face to him. “Not what you expected?”

He chuckled as he softly kissed her. “I forget. You’re innocent. Time to come get in bed with the sinner.”

Tricia Andersen lives in Iowa with her husband, Brian and her three children – her sons, Jake and Jon, and her daughter, Alex.  She graduated from the University of Iowa with a Bachelor of Arts in English and from Kirkwood Community College with an Associate of Arts degree in Communications Media/Public Relations.  Along with writing (which she loves to do), Tricia practices mixed martial arts, coaches and participates in track and field, reads, sews and is involved in many of her children’s activities.