Out of the Penalty Box
by Genevive Chamblee

Two minutes in the box or a lifetime out?

Hockey player Aidan Lefèvre’s professional and personal life is on ice. Recovering from an injury and traded to a new team, Aidan is attempting to prove his viability to his coaches, fans, and teammates. Just when he believes he’s succeeded, another accident during the playoffs threatens to unravel all of his progress.

Having relocated away from family and friends, Aidan turns to his extroverted team captain, Christophe Fontenot, whose jovial nature lifts everyone’s spirits. But when Aidan discovers his attraction for Christophe changes the meaning of “body checking,” Aidan questions more than his hockey skills.

Should he deny what he feels or come out of the “box”?

The Crossroads Duet Boxed Set by Rachel Blaufeld is just 99¢ for a limited time only!

LIMITED EDITION BOX SET!!
Twin brothers, both broken and in love with the one person they shouldn’t be in love with…

Redemption Lane
Sometimes the past bleeds into the future.

Bess, a wild party girl running from herself, literally falls victim to her demons when she collapses in the most unexpected of places.
Lane, a tightly wound, up-and-coming CEO who can’t seem to stop enabling his brother, doesn’t know what hit him when Bess falls at his feet and into his life.

It was a night she doesn’t remember, and one he can’t forget.

But rather than stay and help the needy college coed, Lane decides to teach his brother a long overdue lesson––a decision that later comes back to haunt him and only adds fury to the transgressions of his past he is already fleeing from.
Years later, Bess and Lane meet again. She doesn’t know him, and he doesn’t share that he knows what happened on that ill-fated night when she almost died. After all, he has a web of complicated lies from his own youth to protect.

Both are seeking salvation in the arms of others and ignoring the truth—that the only road to redemption lies in confronting your past.

When the past and present collide, is there any chance at redemption?

For Jake Wrigley, the future is bleak. Some people are survivors, but he’s getting by on his bad-boy looks and charming smile. He owns a gym, gets into bar fights, and wrestles his demons with rough workouts—both in and out of the bedroom.

For Alyson Road, the future is bright. Life can only improve from where she grew up. She graduated at the top of her law class, cares for her ailing mom, and in her job, she defends those who can’t afford anyone else. Her work is thankless but honest.

Jake’s twin brother has been covering his ass for as long as they’ve been alive, but that all changes when Jake finds himself in front of the fiery public defender, his future in her hands. For the first time ever, he doesn’t want to involve his brother, finally realizing he needs to stand alone, be his own man.

Even if Jake’s never absolved of his past wrongdoings or his heart is never scrubbed of the blackness that resides there, he can do one good deed—protect the beautiful lawyer who touched his soul—until helping her nearly becomes his own undoing. 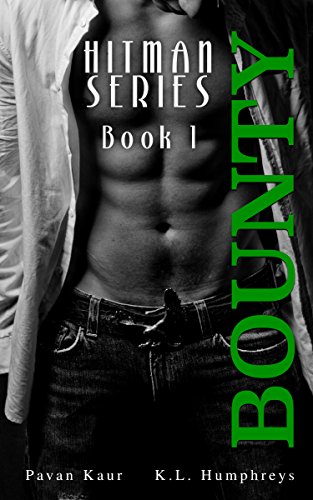 #Bounty by #PavanKaur & #KLHumphreys is now LIVE and just #99Pennies!!! Snag your copy of this #DarkRomance today and find out why early reviewers were left desperate for more!

LUCY
This isn’t your typical love story.
My life was great, I was happy until I heard something I shouldn’t have.
Now I’m running and there’s only one man that can save me.
He’s also the one man I shouldn’t trust.
Will the bounty be too high for him?

CASH
It was meant to be an easy job, Probably the easiest I’ve ever had.
But something about her threw me.
The Bounty on her head is tempting.
But then again, so is she.
The question is, can I save her?

This incredible set is only available in February!

A collection of the first-in-the-series from TWENTY of today’s must-read authors.

With over 5,000 pages in a delicious variety of romance genres, this collection of full-length books is sure to satisfy your every literary need—and desire.

From dark to light, funny to angsty, bad boys to bad girls, and everything in between, you’re guaranteed to find your next favorite series.

The Prince and the Player by Tia Louise
After the Storm by M. Stratton
Love Under Construction by MC Cerny Author
Jase by MJ Fields
Riddick by Kathy Coopmans
The Azure Kingdom by Michelle Dare
A Beautiful Mess by T.k. Leigh
Consensual by Katherine Rhodes
Adam’s Apple by Liv Morris
Offbeat by S Moose Author
Relent by Nina Levine
The Promise by Kate Benson
Hard by Scott Hildreth
A Special Obsession by A.m. Hargrove
Crazy Maybe by A. D. Justice
Betrayal by Aleatha Romig
The Proposition by Katie Ashley
Rush by CA Harms
Throttle Me by Chelle Bliss
Luca by Gina Whitney

“You’re not tinged, babe. Not then, not now, not ever. I love you. And you don’t need the ocean water to cleanse you. Whatever crap you’re spewing is just that—BS. You’re perfect.”

Lynx fled the Vegas Underground for Miami, desperate to uncover certain secrets of her past when she goes rogue in a dangerous world.
Michael Anthony Wind shed his pretty-boy upbringing and family legacy for his first job as a bouncer at the Electric Tunnel. Now successful in his own right, he’s only missing his woman.
When she’s finally found, Lynx is broken, unsure if she can be put back together. Mike may be strong, but is he strong enough for the job?

Their story isn’t beautiful or safe, but it’s theirs. Two tortured souls colored by their past, looking to paint a different future.

**Final book in The Electric Tunnel Series. Can Standalone.