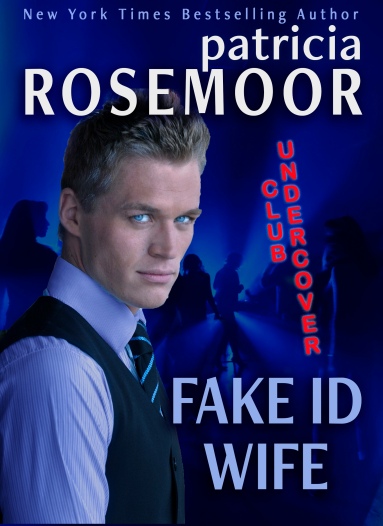 No cover charged… no ID required… safety guaranteed…
Convicted of a murder she didn’t commit, a desperate Elise Mitchell escapes prison to rescue her young son from the clutches of the probable killer, her late husband’s sister. With help from Club Undercover’s owner and employees, she dons a new identity and poses as the wife of the sexy head of security, Logan Smith. Unrecognizable, she works her way back into the Mitchell family’s life to get her son away from them. Falling in love with her fake husband, Elise has no idea that Logan has his own covert reasons to keep her close.
EXCERPT

Logan had spent every waking minute of the past twenty-four hours sizing up the woman who could give him an in to the Mitchell clan. At least insight into the way Kyle Mitchell thought. Some history he didn’t yet know. She could be valuable, even if she was only a Mitchell-by-marriage.

Entering the employee lounge with its upholstered couch and chairs, snack bar and lunch table, he remembered the publicity surrounding the woman’s trial. Elise Mitchell had claimed she was innocent all the way to her jail cell.

But then, they were all “innocent,” every offender he’d ever put behind bars, Logan mused, as he watched her add cream and sugar to the coffee she’d just poured.

Still, whether or not she was innocent was really no concern of his. He was getting paid to do a job, and now it was one that would bring him closer to his own goal. He just had to figure out how to use Elise to his advantage. Until he did that, he wasn’t about to tell her that he was onto her… or what he knew.

When he got right behind her, Elise spun around to face him. “Why are you following me?”

He was so close he could smell her fear. And for reasons he didn’t want to examine too thoroughly, he wanted to get closer, to inhale the scent of her skin and hair. What the hell, he was just another red-blooded male and she was more woman than most could handle. He ignored the tightness in his groin as he caught a shadow of tempting cleavage peaking from her low-cut top, and forced his gaze above her neck.

“What makes you think I don’t just want a cup of coffee myself?” he asked her.

“You’re there, everywhere I look!”

“You’re looking for me?” Logan asked, cracking a smile and changing the timbre of his voice. “I’m flattered.”

“Don’t be. That’s not what I said or meant. What do you think I’m going to do in here, steal the flatware? Relax—it isn’t even silver.”

She said something rude under her breath, picked up her mug of coffee and brushed by him. He tried to figure out why she interested him so much. Plenty of lookers frequented the club. Maybe it was her story. Some part of him wanted to be a sap and believe her. But with his experience, that wouldn’t be easy.

He poured himself a mug of coffee, saying, “Gideon wants me to keep an eye on you.”

“Why? Should I know something?”

Logan could practically see the wheels turning in her mind as she wondered what he knew.

Not about to give away his position—he had the upper hand and wanted to keep it that way until he could play it—he said, “Gideon only wants me to look out for you until you get settled.”

“Yeah, I can see that.” Not a girl, though, a woman. A real, live knockout of a woman. But though he might have quit the force, he was still a cop at heart, and he didn’t like offenders, especially murderers. “If Gideon asks me to do something, he’s the boss. So don’t go taking it personal if I stay close.”

“Just don’t get too close and we’ll be fine,” she countered.

She said it nicely, like it was a request. But Logan sensed her resentment and recognized a vein of repressed panic under the cool facade she’d pulled together. Considering what she had in mind for her future, he would say she’d damn well better be scared. Kyle Mitchell was no one to mess with.

Then again, she could take care of herself. If the state could be believed, she’d taken care of her late husband, and he had been a Mitchell, too. And if the state had been wrong… it wouldn’t do his cause any good to consider the alternatives. That she’d been set up, that she was another victim. He couldn’t worry about Elise Mitchell, couldn’t care about her more than any other Jane Citizen—not with what he had at stake.

He downed his coffee and left the mug on the sink. Brushing off invisible lint from his suit jacket, he buttoned it and headed for the door.

“Be seeing you,” he told Elise.

He had his own demons—and a truly innocent woman as dead as Elise’s late husband—to avenge.