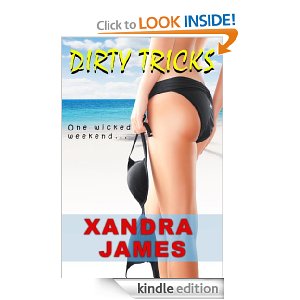 She wanted revenge. He wanted her.

Cat was desperate, but pretending to be a ghost to stop the
renovation on the neighbouring manor house was a new low even for her. All she
needed to do, though, was slow down the renovation and figure out a way to make
the owner pay for stealing her family home years before. Simple.

Everything was perfect until a new guy arrived on site,
turning her plans for revenge upside down, and her body to a puddle of lusty
mush. But when she finds out the secret he’s been keeping, will their
attraction be strong enough to hold them together? Or will family ties tear
them apart?

Warning: this story contains a large, orange cat called Elvis, a fake ghost called Cat, a sizzling hot romance, and it just may cause you to crack a smile.

Allyson’s Review
Dirty Tricks was a Fun read. Cat’s family manor was sold years ago to a vulture, breaking her grandmother’s heart. She felt her grandmother was treated wrongly and swears to get revenge. What better way to do that, than when the manor was being renovated, making everybody think it was haunted. Cat was funny, caring, and kind with a quick temper.
She didn’t expect Jay to come head the project. Jay was fun, smart, sexy, hardworking, strong, protective, loyal. The sparks between them were incredibly strong. Only problem was they were both hiding things. This was great touching read, that I highly recommend.