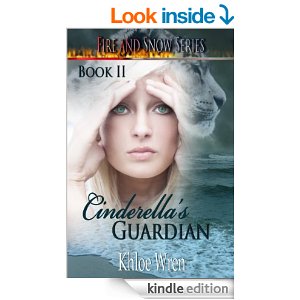 After watching his older brother win the heart of his mate, Conner White can’t wait for his turn. When he finally has his first dream of his mate, he is both relieved that he knows who she is and worried as he hasn’t been able to get near her since he caught a glimpse of her at his brother’s wedding weeks earlier.

Tina Anderson is beyond miserable. Her mother abandoned her after a life altering injury that left the vibrant gymnast in a wheelchair. Her father has been forced to leave her to go work off shore. She’s been left in the care of a harsh bitter woman who is only after her father and will do whatever she deems necessary to take her place in his life. No matter the cost.

Conner and Tina’s road to happiness is filled with twists, turns and pot holes, but are they strong enough to pull each other through it all?

Cinderella’s Guardian is book 2 of the Fire and Snow series.  I haven’t read the first one- and I don’t feel like it detracted from my enjoyment of this novel.  Of course, now I plan on going back to read the first one, as I’d love to know more about Dom and Adele’s story.  And, I am greatly anticipating the next installment in this series.

Tina Anderson had a tragic accident that landed her in a wheelchair, and ended her career as a gymnast and Olympic hopeful.  She not only has to cope with this life changing event, but her mother, Gloria, promptly dumps her- after all, a daughter in a wheelchair does nothing for one’s image.  This sets stage for Tina to be reunited with her dad, Dale, in their home town.

Tina is a tough character to pigeon hole.  At some times, she seems like a strong woman, knowing her own mind, at other times, she is a lost little girl. In fact, in the beginning of the book, I had to go back and double check that she was a twenty year old.  While her dependence and loss of self are completely understandable due to the radical changes in her life, as well as her (most likely) sheltered life of a professional athlete, I still found it a bit jarring for some reason.

Conner, however, saves the story for me- bringing the novel up from a three star to a four star, as well as the fact it piqued my interest enough to want to read the other books in the series.  He is a sexy fireman AND a leopard shifter.  Is a hotter pairing possible?  His desire to protect his love, as well as his willingness to show and feel emotions were a major factor in his likability.

So, what about my rating?  Well, originally it struck a 3 star rating.  However, considering the books ability to draw me into this Shifter world, and the fact that the book is well written, makes me bring it up to a four star- with a little trepidation.  I do think you’ll enjoy this book, a remaking of the classic Cinderella story.  I also look forward to reading the future books in this series.