Title: Vengeance Executed
Series: Vengeance Trilogy #2
Author: Zoey Indiana
Genre: Dystopian/Sci-Fi Romance
Release Date: July 1, 2020
Blurb
Saving the world is much harder when you shouldn’t exist.Freya is the closest kept secret in the government. Her psychic powers alone
strike fear into her superiors. Working as a double agent for the Resistance,
she must devise a plan to destabilize the government that has her under
constant supervision, as well as every other citizen.As one of only three living men, Bash is her unlikely accomplice. Behind the
scenes, he is the deadliest hacker that has ever worked for the Resistance.
Determined to overthrow the government that made his gender illegal, he won’t
stop until the Dystopia is destroyed.

When an ARI spy manages to locate their headquarters, both of them must find a
way to keep the existence of men a secret.

If you love badass heroines, bearded men, and sizzling romance that will keep
you up all night long… Join the Resistance and download Vengeance Executed
today! 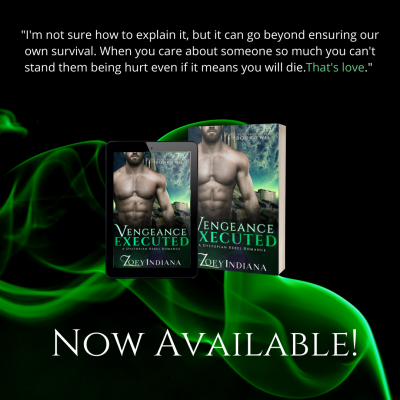 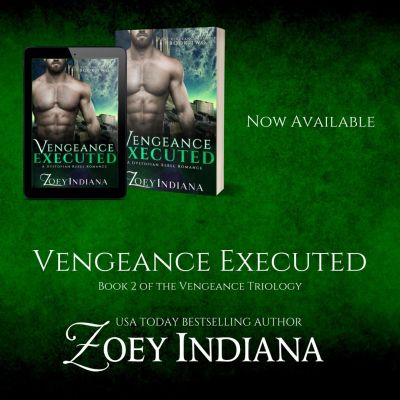 Excerpt
“I can’t get
over how big this place is.” Tris’Tyn’s voice broke Bash’s sexual fantasy
starring Freya.
“It’s huge, so
large that you’re not sure how to deal with all of it.” A grin flashed on
Freya’s face. Bash scowled at her choice of words as memories of the first time
they made love surfaced. She’d never seen one in person before and worried he
wouldn’t fit. He’d proven that theory wrong.
“It’s nothing
like the Resistance camp I came from.”
“That’s because
they weren’t the Resistance.” Bash growled as he raised an eyebrow at
Freya.
“I meant to ask
what you meant by the ‘real Resistance’.” Tris’Tyn’s gaze bounced to her.
“You don’t have
to worry about that anymore. You’re with us now and soon we’ll strike the final
blow to ARI and the Sovereign. Then everyone will be free.” Nova
interjected with a glare at both Freya and him. Busted.
After Tris’Tyn and
Nova got off the lift, Freya grinned at him. When she straightened from the
wall as the doors opened at their stop, Bash swooped her up into his arms then
tossed her over his shoulder. It brought back memories of the first time he’d
done it at the safe house where they’d stayed right after they met.
“Are you
serious right now?” Her fists pounded against his back.
“Sorry, not
sorry.” He didn’t hold back the laugh. “But if you want to give me a
massage, my lower back is a bit tight.”
She slapped his ass
before giving in. Just like last time, there was only so far she could go
without hurting him and he knew she wouldn’t risk that.
Placing his hand
against the wall to reveal the bioscanner, he remembered it was unnecessary.
All he had to do now was imagine the door opening and his nanites used the
wireless communication system to pass the security codes and open the door.
Another thought sealed the door as he tossed Freya on the bed.
Scrambling to sit
up, she glared at him. “Was that really necessary?”
“Not in the
slightest, but it was fun.

FREE for a very limited time! 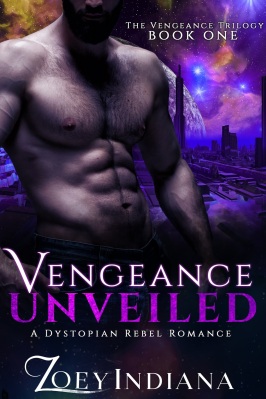 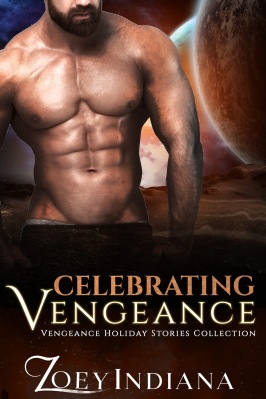 Zoey Indiana was inspired by the idea that everyone deserves
love and their own happily ever after, she loves to write about heroic heroines
who go on amazing adventures while finding the love they deserve. After
creating her first fictional planet where amazing creatures roamed at age ten,
she was determined to prove love could be found in the stars. In addition to
writing, she listens to eclectic music, practices Krav Maga, and takes on home
improvement projects just for the fun of it.
Author Links
WEBSITE
FACEBOOK
FACEBOOK GROUP
INSTAGRAM
TWITTER
GOODREADS
BOOKBUB
AMAZON
Giveaway