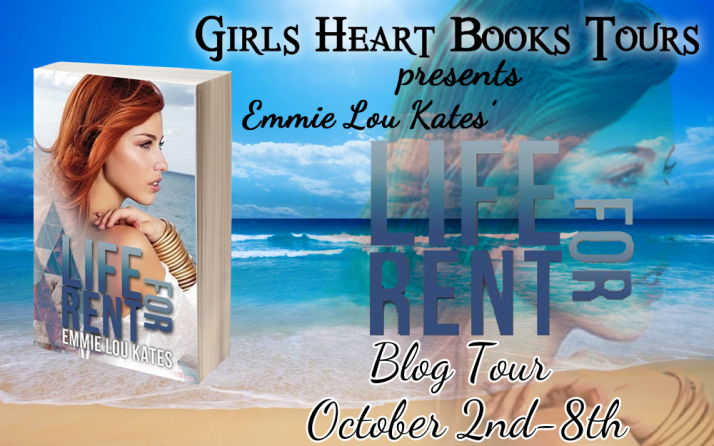 Beth is always running from love, life and relationships and yet another disastrous break up finds her in a little village in Cornwall. She just wants to be left alone to enjoy the quiet country life and continue her work as a freelance artist.

Liam was young free and single, enjoying the sun, surf and sex life to be found living in Cornwall, until tragedy strikes his family and he is left on his own trying to keep the family farm going.

Two lost souls not wanting to be saved until fate and a little Cornish magic steps in.

Enjoy the following excerpt from Life For Rent-

Liam woke the next morning with Beth still fast asleep on top of him. To his dismay he was sporting a major hard on and cursed his anatomy under his breath. He tried to shift position to ease the tightness of his jeans, but Beth squirmed on top of him, which just made matters worse. “Shit!” He muttered as he took as sharp intake of breath.
He attempted to take his mind off the beautiful redhead draped over him, by going over what jobs he needed to get done that day….speak to Joe about the top field, call the farm supplies to order fertiliser….. Beth sighed in her sleep and her warm breath tickled his neck. Nope that wasn’t going to work.
He cringed at the thought of Beths reaction to waking up on top of him in his present condition, so tried counting in his head.
Beth groaned as she started to wake up, she didn’t remember her mattress being this uncomfortable, perhaps her duvet had got caught underneath her. She pushed up with her hands and wiggled her hips trying to dislodge the lump, and was startled by a small yelp by her ear. She opened one eye and found herself staring into those deep blue eyes of….. “Liam?” She gasped trying to push herself up further.
“Don’t move!” Growled Liam.
“Wh.. what? Why?” She asked opening both eyes.
As she focussed on Liam’s face she noticed that he seemed to be in pain, his face was contorted and his cheeks flushed.
He watched as she stared at him in confusion, and saw the flush creep up her cheeks as realisation dawned and leapt off him.
Groaning in pain he grabbed her hand before she could storm off. “Hey! Don’t get the wrong idea. I woke up like this, it doesn’t mean anything.”
She glared at him whilst trying to pull her hand out of his strong grip.
“Well that’s reassuring.” She snapped.
He took in her indignant scowl and made what could be a rash decision, but hey, he was damned whatever he did or said. Using his superior strength, he pulled her back on top of him a locked his lips on hers.

Self confessed hopeless romantic, still looking for my happy ever after. Until then I write about them instead.You can find me at http://emmieloukates.wordpress.com.

Win an ecopy of ‘Life For Rent’