It’s 2:00 am in the morning and I am falling asleep sitting up in bed! I’ve been playing on Ancestry.com for close to 5 hours!

My paternal grandfather is still a mystery. I remember meeting his sister, my great aunt Sue years ago. We were all scared of her! They talked about their brother, Lincoln, so I know I’m on the right track. Plus, I know that my great-grandmothers first name was Grace. But looking at the written birth, death and marriage records has my head spinning.

It shows grandpa got married at 19. Some of the records show his spouse as 21, others show as 31! So far I haven’t found a divorce record, which I surely hope I will as some 12 years later he married my grandmother! I know there are 3 children from his first marriage and 7 to my grandma.

I was told he was raised in an orphanage when his father died and his mother lost it then passed away mysteriously. According to the records I’m finding his father lived long after his wife passed. Yet he put his sons in an orphanage and at least one was adopted by another family. It boggles my mind.

I’ve been told (by my great aunt Sue) that she was taken in by family. But she never spoke more about it. I don’t think they even really know what happened for sure. My grandfather was only 8 when his mother died and he had 2 older siblings and 2 younger. Then I find hints of yet another sibling. And that my great grandma possibly had a previous marriage and child.

And I find no marriage certificate to my great grandpa. You know, the one that gave his children away.

My family history alone could spin one heck of a book, lol.

The pictures alone are enough to scare you! 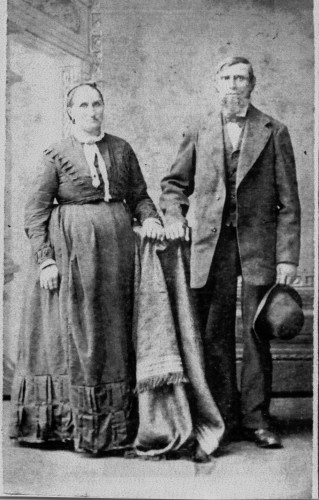 This is a picture of my great great grandparents. Not sure where it was taken, but definitely typical of the day!