I loved playing Oregon Trail. Unfortunately my computer outpaced the game. But my fascination with the hard life on the Oregon Trail never went away. I’ve numerous books on pioneer cooking, life from women’s perspective on the trail, The Oregon Trail field guide and so on. I thought about doing a series on the trails, but it is years out, lol. Never mind the research I’ve done already!

So until then, I read.

So, to one of the nicest authors I’ve met, thank you for a wonderful series!

They are christian historical romances. Wonderful tales about life in America when it was just beginning. Well written, engaging characters that all end up in a HEA. All on the Oregon Trail!

Here’s to Kathleen Ball! Pick up her series and enjoy! If you are in KU, they are there also. Well worth the time and the books left me with a smile on my face and a desire to read more!

I started out of order. Normal, but I had to go back to read the rest. They easily were read alone, but I had to know the other stories! 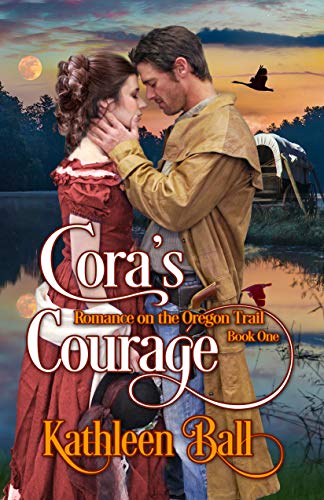 Cora feels indebted to the man, Eddie who saved her and her baby Esther. She travels on the Oregon Trail with him. He intimidates her and has her doing most of the work. He’s jealous and she knows not to look in another man’s direction.
An early snowstorm leaves her in danger of frost bite and when Harrison Walsh carries her off to his wagon to be treated Eddie becomes enraged and drops Cora’s trunk off at Harrison’s wagon.
Harrison Walsh was happily married until three months ago when his wife died. Their dream was to have their own ranch and start a family. Now he’s alone and broken hearted.
When the rest of the wagon train party learns Cora is not married to Eddie, rumors fly and to save her reputation Harrison is made to marry Cora. To his surprise, Cora is not the meek women she was when riding with Eddie. He finds himself drawn to this woman of strength and falls for the baby.
Cora and Harrison both agreed to a marriage of convenience. But when Esther’s father shows up alive, Cora has a big decision to make. 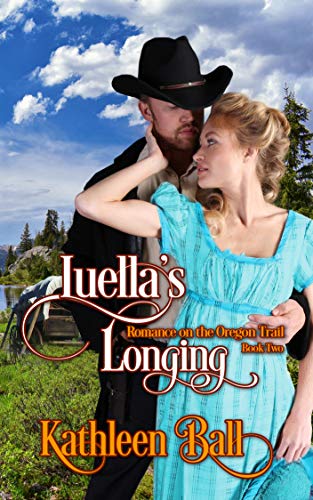 Luella Barnes jumps off the wagon so she can walk along the Oregon Trail. Unfortunately her dress gets caught and her leg is run over by one of the wagon wheels. When her father sees that she is unable to do the chores he tells her she is on her own.
No one offers to take the injured woman into their covered wagon. She is given a place in the extra wagon used by three handsome drovers who work for Harrison Walsh. They know to show her the proper respect a young unmarried woman deserves.
Handsome Irishman Declan Leary is finally a free man in a free country. He is haunted by the people who died during the Irish Famine and those he left behind. Luella’s big heart draws him but he will never love again.
When it’s learned that Luella’s father has tried to sell her to a man gossip starts and Declan finds himself in the middle of the whole mess. In order to preserve her reputation, he is forced to marry her. Can they find common ground amid the growing gossip of a secret baby?
Throughout the action, adventure and mishaps Luella longs for one thing. She prays that God shows her the path she is to take. Don’t miss this emotionally powerful Historical Western Romance.
Luella’s Longing is book two in the Romance on the Oregon Trail series. Don’t miss book one, Cora’s Courage. 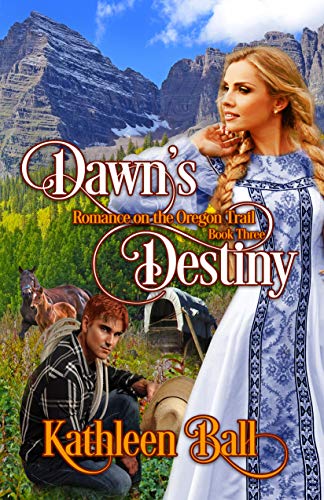 Dawn’s life shatters as she watches her family die and then is kidnapped by Indians. Dawn is badly treated and finally thrown off a cliff. Swift Eagle brings her to his friend on the wagon train, Luella. Dawn has much healing to do. She can heal her body and she spends much time reading her bible but she can’t bear to tell anyone what happened to her and she doesn’t like to be touched.
Heath Leary is looking forward to a future with no ties. He plans to build his ranch and then maybe, someday settle down. He carries Dawn to the wagon to heal and she becomes his responsibility. He resents her and the shame she carries for living with Indians.
Dawn can’t bear to have anyone touch her but she trusts Heath. Constantly worried about her future, Heath offers her a job in Oregon. Sadly she finds out he really wants nothing to do with her and her heart, which finally allows Heath in, breaks.
She’s already been hurt beyond measure and too late he realizes he loves her. Can Heath convince Dawn he’s made an awful mistake? 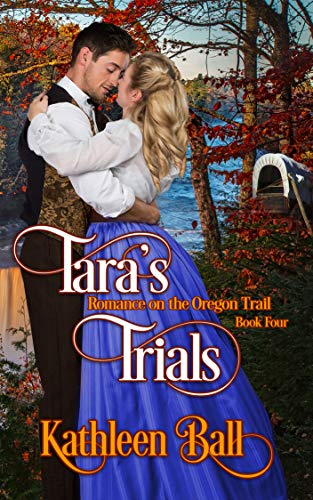 Tara Carmichael watched her whole wagon party including her father killed. She stayed hidden as the men ransacked the wagons searching. Later that evening she heads back to Fort Bridger on the Oregon Trail. Tara has no supplies and the store clerk at Fort Bridger has no mercy. She sees a chance and she takes it by hiding in the back of the wagon Zander is driving. She knows how to hunt, fish, make buckskins, she’s good with a rifle and a knife but she doesn’t know how to be a female men want to marry or a female other women want as a friend. Tara watches as other females in the wagon train party vie for Zander’s attention and it hurts more than she can bear.
Zander Kennedy planned to start a ranch in Oregon with his two best friends the Leary brothers. But he’s not sure that will happen since they both got married along the long, long trail. He’s been alone much of his life and is certain he’ll be alone again in Oregon.
Both Zander and Tara promise themselves they will never risk their hearts. They know how much it hurts when they are left by another. There is a spark between them but they are firm in their resolve to keep their hearts frozen. They avoid each other as much as possible until a ten-year-old girl Rhetta is in danger living with Indians.
Her adoptive Indian father is willing to marry her off to Zander. The father is told Zander is married. Not believing Zander’s marital status he wants witnesses watching Zander and Tara go into the wagon together and stay for the night. Both understand they must marry or risk Tara’s good name. They certainly don’t want the Indian tribe upset with them.
Join Zander, Tara, Heath, Dawn, Declan, Luella, Harrison, Cora and Essie as they travel to the end of The Oregon Trail. Feel the joy, the danger, the doubt, the broken hearts and the love the experience along the way.

I read Tara’s Trials first and loved it! But read them in order. It’s great to revisit each couple in the next book!

Then read her Oregon Trail Dreamin’ books and The Settler’s books! Links are to the first in each series! I’m sure you’ll enjoy them as much as I did!