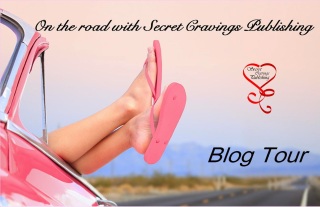 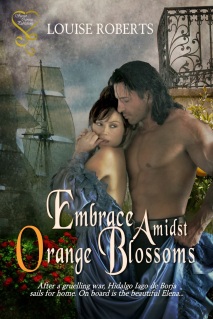 It is the spring of 1622. Soldiers are arriving at the port of Seville from a gruelling war in the Netherlands. Amongst them Don Iago
Borja, heir to the Estates of the Villa Sant’Angelo near the village of Cullera in the province of Valencia in eastern Spain. After a five year absence Iago is anxious to return home.

He is pleased to find his uncle’s ship the Santa Theresa in the harbor and more so when he is told he is sailing for
Valencia. As the ship departs, Iago is delighted on discovering his uncle’s beautiful daughter, Elena, is also aboard.

However the scars of battle and a mental conflict of loyalty with his uncle have Iago wondering if love with Elena is possible?

Will Iago’s inner demons prove to be too large an obstacle or will he be able to overcome his feelings of guilt?

Louise Roberts was born in Alexandria, Egypt in August 1951 to British parents by Maltese descent. Following the Suez Crisis in November
1956 her parents were compelled to abandon their assets and home, and leave the country as political refugees. Louise grew up and was educated in London, England and has always held a passion for history and English Literature.

In 1988 she immigrated to Sydney, Australia and presently lives with her family in the northern bushland suburb of Berowra, which is
located just south of the Hawkesbury River.

Contact links:
Facebook:http://www.facebook.com/louise.roberts.14203544
Twitter: @LouiseRobertsAu
Blog: http://www.louiserobertsromance.wordpress.com
Buy links:
Smashwords:https://www.smashwords.com/books/view/453557
Secret Cravings Store: http://store.secretcravingspublishing.com/index.php?main_page=book_info&cPath=10&products_id=894
Barnes & Noble:  http://www.barnesandnoble.com/w/embracing-amidst-orange-blossoms-louise-roberts/1119885162?ean=2940149728930
Amazon: http://www.amazon.com.au/Embracing-Amidst-Orange-Blossoms-Sword-ebook/dp/B00LEU4KWO/ref=sr_1_13?s=digital-text&ie=UTF8&qid=1404216936&sr=1-13
Excerpt 1
Laughing and music emerged from various tavernas which were scattered along the waterfront, but to her, the sounds seemed muted as she slipped in and out of her own private thoughts. She wondered about the future and what her Valencian
family was like. She had heard about them from her father, and now she longed to meet them, especially Dorotea who was of similar age.
A sudden noise made her turn around. The crew had begun to make the ship ready for their departure at midnight when high tide was expected. Men were running up the ratlines to the yards. The Bosun was calling out instructions, as men ran
barefoot for ‘ad and aft carrying bits of nautical equipment. Provisions were being brought up from the quay in large nets and were lowered into the hold by men pulling ropes which had been strung up through pulleys suspended from mast
jibs. There were barrels of fresh water and casks of wine, barrels of salted fish, sacks of flour and grain, boxes of fruit and vegetables.
Elena was slowly becoming dizzy by all the activity, and although she wished to return to the safety of her cabin, she did not dare to move for fear of being knocked over by any of the mariners who were rushing about. If only her father would
rescue her, as captain of the ship however he was far too busy somewhere else.
She turned back to face the town, at least psychologically, it provided her with a temporary sanctuary from the hectic madness about her. She had been aboard since late afternoon when her grandparents had accompanied their granddaughter
to their son-in-law’s vessel. Don Gregario had arrived a mere two days previously to arrange for his daughter, Elena, to accompany him to their family’s property in Cullera in the province of Valencia.
As she stared into the darkness she could see two men who appeared to be arguing. One of them seemed relatively young, perhaps not much older than herself. She could vaguely make out that he was well attired, and looked like one of the soldiers she and her grandfather had seen in the port a few days before. From what she could make out he appeared tall though of a stocky muscular build. The other man was much older and more rugged. He was looking over the young man’s horse.
She surmised they must be arguing over a price for the animal.Finally after a great deal of gesticulations on the part of the older man the transaction seemed to conclude. The young man rubbed the horse’s nose as if to say farewell. After removing the saddle and bags from its back, he swung them over his own shoulder, his distinct posture buckling from their weight.
As the rugged man moved away leading his new acquisition, she saw the younger man trudge up the gang plank onto the ship. Curiosity and unexpected excitement gripped her, making her heart race. She edged forward, leaning over the
guardrail enabling her to glance amidships. Elena followed his progress as he stepped on board. Light from several lanterns which had been secured to the main mast shone onto the stranger.
She saw the Bosun stop momentarily from his duties and walk over to him. They seemed genuinely pleased to meet as they wrapped their arms about each other in a friendly hug. Another old mariner also approached his voice loud amongst the
bustle of surrounding sounds to offer a welcome and to assist the young man with his baggage. Their exchanges were jovial and Elena could hear them laughing at some inaudible comment. She watched the Bosun shake the young man’s
hand before he returned to his duties.
Elena froze as the stranger and the old sailor walked toward where she was standing. As they approached, she could now see that she had been right in her assessment of his height and build, but now she could also make out he had certain handsome features. Her eyes remained fixed on him as they came nearer to the doorway which led to the cabins beneath the stern quarterdeck. Although she had thought he had not seen her, when they arrived at the entrance, he stopped, looked up
at her, removed his hat in a sweeping motion, and bowed low.
Even though it was just a mere instant that their eyes had met in the dim light, she could feel a strong sensuality about him which sent ripples of pleasure through her skin and her nipples hardened. Her breathing became shallower. She felt a warm wetness between her thighs and her pulse quickened when she saw his face clearly in the light of the doorway lantern. Although he was smiling at her, she sensed something was not quite what it seemed. The uncertainty of her earlier carnal reaction made her shiver as though cold, making her long for the warmth of her cabin. Elena downcast her eyes and made a simple short curtsey in response. When she looked up again, he was gone.