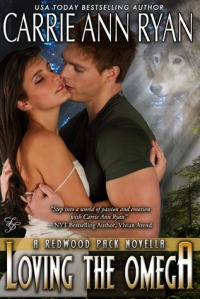 Maddox Jamenson almost lost his mate before he knew she existed, but his life is now exactly how he’d dreamed it. The war with the Centrals is over, and his family is healing one day at a time. Ellie is reveling in the simple perfection that is her life and family now, but that doesn’t mean she can shed the self-doubts and concerns that come with being a new mother, mate, and Redwood.
When a disturbance in their quiet life threatens to ruin everything they’ve fought for, Maddox and Ellie will have to learn not only to rely on each other more than ever, but find within themselves the power to forgive.
Author’s Note: This is a novella set after book 7 to give you a taste of Maddox and Ellie. It is best that you have already immersed yourselves in the Redwood Pack world, however even new readers will enjoy a glimpse of one of the Redwood’s favorite couples

I enjoyed this look into the life of Maddox and Ellie. I have to admit, I have Fighting Fate on Kindle, but because I received Loving the Omega for review, I read it, even though I haven’t yet read Fighting Fate.
While these books are meant to be able to be read as stand alone, there were spoilers in Loving the Omega that made me wish I’d read Fighting Fate first. So, if you are following the series, I recommend you read it in order.
My only complaint about Loving the Omega was that it ended it bit abruptly, in my opinion. That’s why I am giving it a 4 instead of a 5 heart review. I reached the end and went “That’s it?” I wanted to turn the page and keep going!
As Always, Carrie Ann gave us a great story, with high emotions and suspense. The time line jumps several years into the future, and it was good to see how things are turning out for the Redwoods.
I can’t wait for the continuation of the series with the Talon pack.

From Wikipedia, the free encyclopedia

“The Star-Spangled Banner” is the national anthem of the United States. The lyrics come from “Defence of Fort M’Henry”,[1] a poem written in 1814 by the 35-year-old lawyer and amateur poet, Francis Scott Key, after witnessing the bombardment of Fort McHenry by British ships of the Royal Navy in the Chesapeake Bay during the Battle of Fort McHenry in the War of 1812.

The poem was set to the tune of a popular British song written by John Stafford Smith for the Anacreontic Society, a men’s social club in London. “The Anacreontic Song” (or “To Anacreon in Heaven“), with various lyrics, was already popular in the United States. Set to Key’s poem and renamed “The Star-Spangled Banner”, it would soon become a well-known American patriotic song. With a range of one and a half octaves, it is known for being difficult to sing. Although the poem has four stanzas, only the first is commonly sung today.

Before 1931, other songs served as the hymns of American officialdom. “Hail, Columbia” served this purpose at official functions for most of the 19th century. “My Country, ‘Tis of Thee“, whose melody is identical to “God Save the Queen“, the British national anthem,[2] also served as a de facto anthem.[3] Following the War of 1812 and subsequent American wars, other songs would emerge to compete for popularity at public events, among them “The Star-Spangled Banner”.

Here is out National Anthem sung by the combined choirs of the Military Academies: