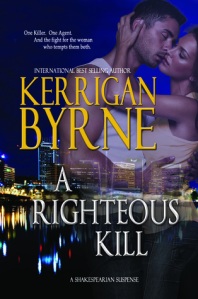 “’Tis one thing to be tempted, another thing to fall.”
~William Shakespeare, Measure for Measure.

He’s no stranger to sin…

A prolific serial killer is crucifying and ‘baptizing’ the working girls of Portland, and FBI Special Agent Luca Ramirez is locked in a desperate race to prevent the next casualty. The game changes when the latest victim is pulled out of the Willamette River alive, and Luca knows this witness may be his key to breaking the case. When the fanatical killer threatens her life a second time, Luca is assigned to protect the most unique and captivating woman he’s ever met by going undercover as her lover. He finds himself locked in a relentless game of cat and mouse with an elusive and violent psychopath, while battling his temptation for the alluring woman he’s charged to protect with his life. As the fatalities continue to mount, so does the intensity of his desire for a woman who should be forbidden, but is determined to dial up the heat.

Bestselling author Kerrigan Byrne laces dangerous, edgy content with palette-cleansing humor in this sexy, character-driven series debut that will leave you wondering… Is there such a thing as A Righteous Kill?
http://www.amazon.com/Righteous-Kill-Shakespearean-Suspense-ebook/dp/B00G76ORX2/ref=sr_1_1?s=digital-text&ie=UTF8&qid=1383713024&sr=1-1&keywords=A+Righteous+kill

Tamara’s review
Okay, do you want to know how awesome this book was? The copy I received was FUBARed in the download. the first two chapters were fine and then, all of a sudden I would get 5 or 6 pages of chapter three and then it would go back to the prologue for a couple pages. It jumped like this throughout the entire rest of the book. I contacted the review coordinator who sent it to me, but she was tied up with a personal emergency and couldn’t get me a new copy. However, I couldn’t stop reading and just wait. I NEEDED to know what was going to happen next.
I loved the characters, Hero’s crazy Irish/Russian family. The awesome FBI agents and especially our Hero,Luca.I always love a hero who doesn’t know he’s looking for love, until it slaps him in the side of the head.
A Righteous Kill was a thrilling romantic suspense story, with well researched theological/historical plot elements. I was guessing right until the very end as to the identity of John the Baptist. I am a big fan of well written romantic suspense. It is not an easy genre and requires a devious mind and thorough plotting to weave together the elements of suspense and romance without overplaying wither hand.
A Righteous Kill… well it killed! Kerrigan Byrne will definitely be added to my TBR list.I hope the siblings in the Katrova-Connor family have novels of their own coming, because I definitely want to see more of them.

There are two absolutes in war, people get killed and you can’t stop it. Twenty-three year old Corpsman Emme Sawyer doesn’t believe in absolutes. Excelling in school Emme graduated early flew through undergrad work and was on her way to med school when she realized she wanted more. Joining the Navy, Emma deploys as a medical corpsman with a Marine Infantry Unit heading into the Helmand Providence in Afghanistan.
When the bullets start to fly Emme learns that medical school doesn’t prepare you for war and being a girl doesn’t make getting killed off limits. Emme struggles against the cultural biases of a foreign land and the limitations her unit is put under while trying to push the Taliban out.  After her guard is killed by an IED, Emme shuts off her emotions—until her commanding officer, Raven takes the job of looking after her, arousing feelings she doesn’t want and isn’t supposed to have.  As Raven begins to reciprocate Emme realizes she missed out on a lot more than classes when she skipped high school. Unsure how to deal with the loss Emme turns to Raven, for support.  As their connection grows Emme hesitates to take it further, knowing that developing feelings in a combat zone is dangerous when each step could be your last. Aware of the regulations against starting a relationship with someone in his unit, Raven tries to suppress his feelings but knows they are too strong to deny.  Soon Emme and Raven learn you can’t choose when and where love finds you and sometimes you have to take a chance.

END_OF_DOCUMENT_TOKEN_TO_BE_REPLACED 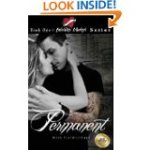 Blurb:
What is Permanent?

Always on the outside looking in, accountant, Lindsay Stevens, has calculated her transformation from a small town, nerdy bookkeeper to a sleek, high-powered accountant down to the last penny.  With all her checks finally in balance, she moves to California to start a new life free of her embarrassing past she never wants revealed.

As Hollywood’s hottest tattoo artist, Shane Elliott thrives on standing out.  Charismatic and free of commitments, he travels through life with a wink and a smile, hiding the letters he receives from the IRS as if they don’t exist.  Now with bills to pay and tax collectors breathing down his back, for the first time in his life Shane can’t charm his way out of his situation.  However, when his new neighbor literally falls into his life, he knows he has struck gold once again.

Though Lindsay tries to keep her distance, she suddenly finds herself trying to hide her true self as she thrust into a world she doesn’t think she belongs, but can’t resist.  In his good-time life, Shane  must discover there is more to life than a party if he wants something more.

With their lives intertwined, the two must learn accept each other, themselves and their love.

Worlds collide as they decide what is truly permanent.

Permanent is the first book in the Indelibly Marked Series that follows the lives and loves of those surrounding Permanent Tattoo.  Every book in the series stands on its own

This book was one that was great and can teach you a great message in life. I feel in love with the cover and I had to read it.

Lindsay Stevens is leaving Ohio and her small town life and working with her father. She moves to California to start a new life and change who she is. She seems to be doing ok until five days after she moves into her apartment she falls down while wearing high heels. For some reason she thought she could break them in while hanging pictures. She lost her balance and fell and made a huge gash in her forehead. All of a sudden someone breaks her door down and she gets the shock of her life. Shane Elliott is not your normal guy.

Shane has his own business named Permanent Tattoo. He is Hollywood’s hottest tattoo artist and has his tattoos on magazines. He makes pictures come alive and everyone wants a tattoo by him. Everything seems to be going good until the IRS starts sending him letters. He has to find a way out of this mess before he loses everything and his brother and sister are counting on him. Lindsay seems to be the answer to his prayers. Who knew that they would have sparks between them?

The author did a great job bringing this book to life. You also learn a lesson. You have a guy who has tattoos and a blue Mohawk and a woman who has changed everything about herself. They change who they are because they think it is what the other wants. All they needed to do was trust themselves and be who they really are. Shane does a lot of growing up in this book and he becomes a man that loves a woman and it doesn’t scare him as much as he thought. The only problem is Shane’s older brother, he tells him that he isn’t what Lindsay needs. Even though the characters in this book are not your normal family they take care of each other and that is all anyone would really want.

I truly feel in love with this book and the characters just came alive off the paper and become real to me. I got so lost in the book that I forgot it really wasn’t real. I could just imagine all the tattoos that Shane did and see them in my mind. This book just showed me that you never judge people on what is on the outside, you need to look on what is inside. That is when you know how someone really is. I can truly say that this book was well written and I can’t wait for the next one. I would tell everyone to take a chance on this book because you won’t regret it.

Blurb:
When they say, “you can’t go home again,” they’re talking about Mina Calvi, twenty-something Italian transplant to California. Still nursing a broken heart, desperate to discover her place in the world, Mina arrives in the town of her birth in Veneto, Italy. In the decade she’s been gone, the village nestled at the foot of the Dolomites has changed much, yet remained oddly the same. Friends have moved on, family members passed away. Mina feels even more alone in her motherland than in America, and there seem to be too many bizarre deaths for such a tiny, serene village. Then a fresh chance at true love and a welcome bonding with a dear new friend give her hope. But the deadly secrets moldering in the centuries-old cemetery could rip it all from her and leave Mina emptier than before. Will she find herself or lose her heart again? Will Mina survive her Italian Summer? 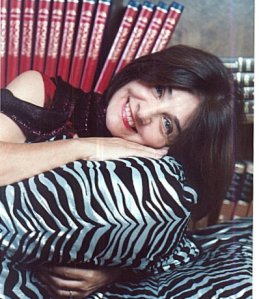 Maria Grazia Swan was born in Italy, but this rolling stone has definitely gathered no moss. She lived in Belgium, France, Germany, in beautiful Orange County, California where she raised her family, and is currently at home in Phoenix, Arizona—but stay tuned for weekly updates of Where in the World is Maria Grazia Swan?

As a young girl, her vivid imagination predestined her to be a writer. She won her first literary award at the age of fourteen while living in Belgium. As a young woman Maria returned to Italy to design for—ooh-la-la—haute couture. Once in the U.S. and after years of concentrating on family, she tackled real estate. These days her time is devoted to her deepest passions: writing and helping people find happiness.

Maria loves travel, opera, good books, hiking, and intelligent movies (if she can find one, that is). When asked about her idea of a perfect evening, she favors stimulating conversation, tasty Italian food and perfectly chilled Prosecco—but then, who doesn’t?

Maria has written short stories for anthologies, articles for high profile magazines and numerous blogs tackling love and life. She engaged her editorial and non-fiction skills for Boomer Babes: Tales of Love and Lust in the Later Years. Her romantic suspense novels Love Thy Sister and Bosom Bodies are available at Amazon.com.