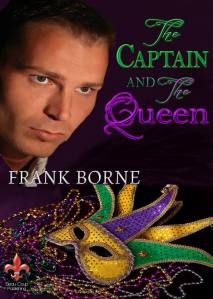 *****Blurb*****
The Captain and the Queen is a celebration of all that is New Orleans. This is not just a sweet romance, but a glimpse into the very heart of the Crescent City and gives you a chance to experience the inner workings of Mardi Gras. Baxter Edwards, the captain of a Mardi Gras Carnival krewe struggling in changing economic times, selects a celebrity, Lyle Alexander, to serve as its monarch. Baxter is convinced his choice will infuse the club with much needed vitality. But when he chooses his best friend’s college-age daughter, Claire Boudreaux, to serve as queen, Baxter is surprised when he and Claire develop feelings for one another. Their love for New Orleans unites them but their age difference threatens to keep them apart as the disapproval of family and friends presents obstacles for the cross-generational relationship. Should Baxter leave Claire alone to graduate and begin her career without the pressure of dating a man in a different phase of life? Come to the Big Easy and let the good times roll.
*****Excerpt*****
Baxter noticed she was having difficulty removing the crown, which had become snarled in her golden locks.
“Ouch. Something is caught.”
“Here. Let me help you.”
He stood at her side and assisted her in untangling her hair from the ornament. She pulled bobby pins holding the hairdo tight and compact except for some wisps of curls hanging at the back of her neck. The motion released the crown from her coiffure, which fell with grace to her shoulders.
“Well, there you go.” Baxter took the crown from her and held it while she ran her fingers through her hair and shook her head.
“That’s much better, but I need a brush.”
“I’m sorry I didn’t go to the play. I was selfish.”
“No, it’s okay, Bax. I see what Sancus means to you.”
“I’m bad about letting the club rule my life, though. It has gotten in the way in the past. I need to change. I have to remind myself of our theme, ‘All You Need is Love.’ That’s what’s important.”
“I think you just showed the whole room a lot of love.”
Baxter was captivated by Claire’s beauty and understanding, while she appreciated his sensitivity and admired his mature, yet boyish good looks. He put his hand on her hip, pulling her toward him as she placed her hand on his hard chest. Claire sighed and closed her eyes, preparing for what she hoped was a long and sensual kiss. However, they flinched when Kathy knocked on the door, summoning Claire so they could go home.
“Yoo hoo. Claire?” Her mother opened the door in time to observe the pair embracing and about to kiss, with the crown in Baxter’s hands preventing their bodies from becoming one.
“Yes, Mom?”
“Your father and I are ready to go. The crowd is pretty much gone.”
“Okay.” She took the crown from Baxter and headed for the door. “Thank you, Bax. It was a great day.”
“Thank you. They loved you.”
Claire slipped past her mother, who gave Baxter a judgmental glance before also leaving.
http://amzn.to/1eW88fC
https://www.facebook.com/authorfrankborne
******** Bio*********
Frank Borne has authored numerous non-fiction books and short essays concerning Jefferson Parish history and politics, and served as editor of The West Bank Beacon, a good-news community newspaper, for three and a half years. In 2012, he self-published his first novel, But for the Grace of God, and in 2013, Astraea Press released his novel Fame and Misfortune. Borne serves as Chief Deputy Clerk of Court with the Jefferson Parish Clerk of Court’s Office in Gretna, Louisiana, where he has been employed since 1994. He graduated from Southeastern Louisiana University with a bachelor’s degree in government and a minor in history. Borne lives in Harvey, Louisiana, with his wife Schlise.