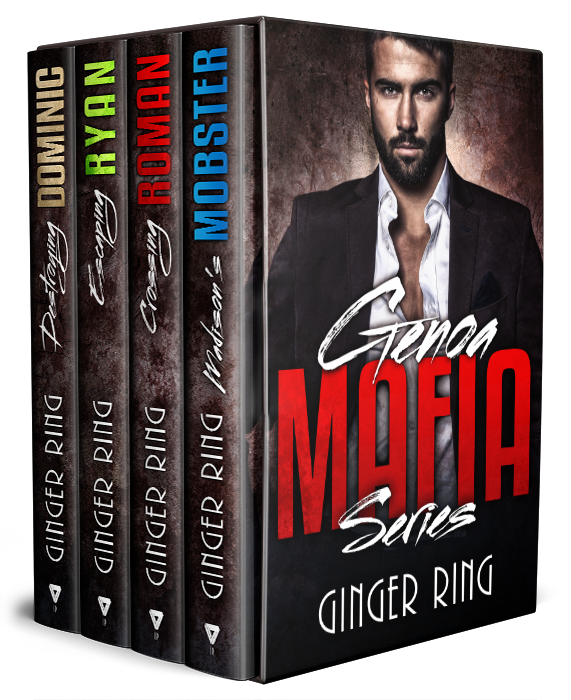 It’s about loyalty. It’s about blood. And it’s about power.
When it comes to the mafia, there is no line that won’t get crossed. These men are ruthless, callous, bred to ruin and rule a world where violence is the only answer.
But it’s the women who warm their beds who have the power to thaw their hearts.
Have a taste for the wicked, and a craving for the taboo?
Dive into this box set of four Mafia romance novels full mind-blowing suspense and explosive action. The Genoa Mafia series is about to give you more than you bargained for…
Madison’s Mobster
Genoa Mafia #.5
Madison Miller loves what she does. She takes pride in helping brides find the gowns they’ll walk down the aisle in. But she still longs to hear wedding bells of her own and discovers that her dream of finding a husband is souring her work. She’s about to give up her fantasy of marriage when she bumps into a handsome stranger…literally.
A big city man who lives by the gun…
Roman Caponelli is seeking a quiet life in a quiet town and sees Lake Genoa, Wisconsin as the perfect place. His ties to the mob make it difficult for him to be a normal man, but he wants to give it a shot when a woman named Madison walks into his life. She’s beautiful, driven, and challenges him unlike any other woman he knew back in Chicago, tempting him to leave his old self behind for good. But as any mobster knows, once you’re in the family, you’re in the family for life…or death.
A mystery that can bring them together, or tear them apart…
Their budding romance becomes complicated when they learn they both have ties to a missing woman. Madison knows her as a bride who called off her wedding when her fiancé beat her, but she’s also the daughter of one of Roman’s friends, making finding this woman top priority. Will they be able to find her before it’s too late, or will the sparks between them ignite an entire town, burning them both in the process?
Sometimes doing what you want is worth the guilt.

Genoa Mafia #1
Madison Miller is a small town girl with big dreams, but years of running her mother’s bridal business has put a damper on that…
Madison is weary of planning other people’s dream weddings and ready to find a man of her own—when a sudden encounter with a handsome visitor leaves her world spinning. He’s all she can think about, but the son of a mafia boss is not the kind of man she’d had in mind. She wonders how being involved with him might impact her life—and the lives of those she cares about.
Roman Caponelli is looking to expand his family’s business on the legitimate side—not the mafia side—and perhaps find a little romance…
Roman is captivated with Madison, but this local beauty wants nothing to do with a criminal like him. Madison said no to him once, and come hell or high water she won’t deny him again—and if he has to use mob tactics to make that happen, so be it. Roman sets out, determined to win the only woman who has kept his interest for more than one night.
Madison is everything he wants in a woman, and he will stop at nothing…
Not until the entire town knows that Crossing Roman is not an option.
Escaping Ryan
Genoa Mafia #2
Valentina Caponelli is more than a spoiled mafia princess…
She flees her father’s Chicago mansion to start a law office in a small-town in Wisconsin, determined to gain her independence.
Free of her father.
Free of her heritage.
Free of dangerous enemies of the family.
Then she falls in love with the one man who may cause her more harm than all the rest.
Officer Ryan Donavan is married to the force…
But the long-legged brunette he cared for after a car crash is all he can think about.
The problem is, Valentina is the sister of mob boss Roman Caponelli. The one man who definitely does not want his only sibling dating a lawman.
Ryan and Roman have made a tenuous peace, but if Ryan gives in to this passion, that peace will be shattered.
A killer is already roaming the streets, and all hell is about to break loose in Lake Genoa, Wisconsin. Can love really conquer all—or only make matters more deadly?
Destroying Dominic
Genoa Mafia #3
I don’t dance.
I don’t date.
I don’t fall in love.
But there’s one woman who does intrigue me—Stephanie Barclay, the best friend of my boss’s wife. The same boss who wants Stephanie dead.
What’s the use? I make people disappear for the mob. What self-respecting woman would want to spend her life with a cleaner? That ship sailed a long time ago. Besides, relationships make you weak. But what if she is already a target?
Stephanie
I plan weddings.
I make people’s dreams come true.
I write stories about the love of a lifetime, but where’s my happily-ever-after and white dress?
My past is a nightmare, a death sentence for anyone who discovers it. No one would be able to see beyond my background—except Dominic Scarlatti, the man who just a couple months ago killed and buried a monster for me.
He may be a nightmare to others, but I’m determined to make him my hero. Even if it kills me.
Goodreads * Amazon 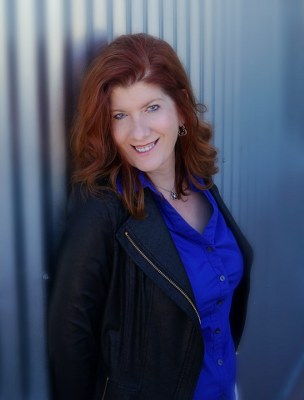 Ginger Ring is an award winning author with a weakness for cheese, dark chocolate, and the Green Bay Packers. She loves reading, watching great movies, and has a quirky sense of humor. Publishing a book has been a lifelong dream of hers and she is excited to share her romantic stories with you. Her heroines are classy, sassy and in search of love and adventure. When Ginger isn’t tracking down old gangster haunts or stopping at historical landmarks, you can find her on the backwaters of the Mississippi River fishing with her husband.
Website * Facebook * Twitter * Bookbub * Amazon * Goodreads