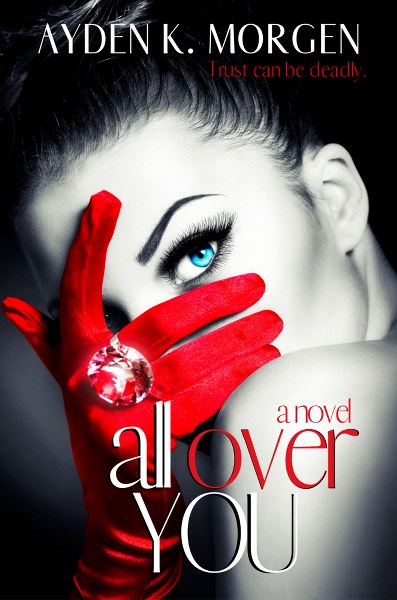 All Over You
by Ayden K. Morgen
Genre: Steamy Romantic Mystery, Suspense

A stolen identity, a missing college kid, and a bossy homicide detective will change a kindergarten teacher’s life forever in this high heat romantic mystery.
Trust can be deadly.
When Ivy Kendall left behind the glitz and glamour of her modeling career for life as a teacher, she never imagined the nightmare waiting for her. A college student is missing, and thanks to a stolen identity…she’s the primary suspect. Now she and a homicide detective are in a race against the clock to prove her innocence and find the person responsible.
All evidence points to someone close to her.
Forced to dive headfirst into the mystery to clear her name, the last thing Ivy should be thinking about is falling for Cameron Lewis, the relentless detective tasked with finding out the truth. But he makes her feel like no one ever has before.
Lucky for her, Cam is willing to break more than a few rules to help her uncover the grisly truth.
All he wants in return is her heart.
As the evidence against her piles up and the intense attraction between her and Cam deepens, Ivy wants nothing more than to lean on the tattooed detective. He already has her body. Now she has to find the courage to trust him with her freedom…and her heart.
Can she and Cam unravel the mystery before it’s too late, or will the dangerous criminal lurking in the shadows take more than just one life?
***All Over You is on sale for .99c on Amazon through May 9th.***
Add to Goodreads
AmazonUS * AmazonWorldwide * Paperback

Ayden K. Morgen is the Amazon Bestselling Author of the Ragnarök Prophesies series. She lives in the heart of Arkansas with her childhood sweetheart/husband of sixteen years, and their furry minions. When not writing, she spends her time hiking, reading, causing mischief, and building a Spork army.
Ayden writes dark and steamy romantic suspense, most often centered around gang and cartel crimes such as human and drug trafficking. Her books feature alpha male cops with protective streaks, the fierce, independent women who love them, and the difficult, heartrending cases that unite them.
She graduated summa cum laude with her Bachelor of Science degree in Criminal Justice and Forensic Psychology in 2009 before going on to complete her graduate degree in CJ and Law. She puts her education to use as a 911 Dispatch Supervisor, where she’s responsible for leading a team of dispatchers as they watch over police, EMS, and firefighters for her county.
Ayden also writes New Adult Fantasy/Paranormal Romance as A.K. Morgen.
Website * Facebook * Twitter * Instagram * Bookbub * Amazon * Goodreads

a $10 Amazon gift card and 2 copies of the All Falls Down duo
Follow the tour HERE for special content and a giveaway!
a Rafflecopter giveaway